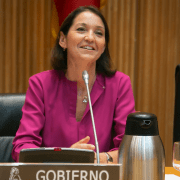 In an interview with El Pais, Spain’s Industry and Tourism Minister, Reyes Maroto, has recognised the impact that COVID 19 has had on the tourism sector. “It hit tourism earlier and harder, and tourism will be the last sector to emerge from this crisis,” she said. However, she pledged that the government would not ignore tourism: “It was key to pulling us out of the 2008 financial crisis, and it will have to do so again.”

Maroto said that tourism’s recovery would have to be based on two concepts: safe destinations and personal safety: “We should make people sure that they can come on holidays to Spain and return home healthy,” she said. “The message should be that Spain is safe, not only because of our excellent health system, but also because of the protocols we have put in place to avoid contagion.”

These protocols, which include hand-washing and social distancing, will have to be followed everywhere – “even on the beaches”.

“Until we find a vaccine, nothing will be like it was,” Maroto said, “All gatherings will have to be limited to maintain distancing, we won’t go shopping in the same way. It’s not that we won’t be able to have a meal or watch a film together, but we will have to do those things a little further apart.”

Maroto predicted that the domestic Spanish market would lead the recovery until other countries emerge from their own crises and international flights are reestablished.

Meanwhile, on Friday the Guardia Civil’s rapid response group leapt into action on Lanzarote to identify and issue denuncias against a mother and her daughter who had been sunbathing on rocks in Playa Blanca. The pair had initially been detected by the Guardia Civil’s helicopter unit.

A British woman who was found walking her dog 5 kilometres from her home was also denounced, while in Fuerteventura, the Guardia’s maritime unit located a surfer who was breaking lockdown rules in the sea.