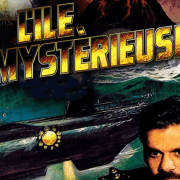 In the seventh edition of our new series, we take a look at some of this island’s most famous and memorable appearances on film, TV and video.

This Spanish TV series starring Omar Sharif was later adapted into a film that is often found on late night TV throughout Europe. It’s an entertaining version of Jules Verne;s classic novel about Captain Nemo and his submarine The Nautilus, and it features some stunning footage filmed on Lanzarote.

However, the film isn’t as famous on Lanzarote as the legend it gave rise to, when Sharif arrived on Lanzarote to make the film and fell in love with the LagOmar complex at Nazaret, which he bought. However , despite being one of the top 50 contract bridge players in the world, Sharif is said to have lost the complex in a card game shortly afterwards.

Apart from scenes set at EL Golfo and Playa Bermejo, the show also seems to have included footage of the spectacular 1971 eruption of the Teneguia colvano in La Palma, the last land-based volcanic eruption on the Canaries.