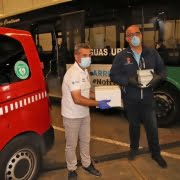 The sounds of building and construction are likely to be heard around the island again as hundreds of non-essential workers returned to work after two weeks of confinement. The non-essential workers were ordered to stay at home two weeks ago, as part of the stricter rules that applied following the first extension of the lockdown.

In anticipation of this limited return to work, Lanzarote’s Cabildo has distributed face masks on public transport in support of the Spanish government’s new recommendations to wear facial protection in situations where social distancing may be difficult.

Torres told local media “We’re doing better than we were a week ago. We’re the region of Spain with the lowest amount of deaths, and with the least crowded intensive care units. Canarians have acted with solidarity and prudence. We won’t let our guard down.”

However, Torres continued “The tourist season has received a blow, so I’ve asked the government to take the particular situation of our islands into account when relaxing the lockdown, and to allow islands that don’t have coronavirus to reopen their businesses little-by-little after the 26th April.”

The most recent statistics back up Torres’s claims, showing that no new cases were detected on Lanzarote yesterday. Of the 28 new cases registered in the Canaries, 23 were on Tenerife, which has been the by far the worst affected of the islands.

In the last seven days, the Canaries have registered 216 new cases of COVID 19, only six of which were on Lanzarote. The official death toll has slowed down considerably, too, with just seven deaths on the islands in the last week.

Children pay the price under Lockdown
Scroll to top