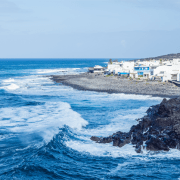 If you’re going to the beach today, you’d better nab a spot early. That’s because just after three o’ clock this afternoon, the highest tide of the year will occur, leaving precious little space on many beaches.

The autumn equinox tides are known in the Canaries as the mareas del Pino, because they usually occur on or around 8th September,  the feast day of Gran Canaria’s patron,  the Virgen del Pino.  These extraordinarily high tides are traditionally mark the end of the summertime on the islands.

Low tide occurred at 8:47 in the morning, and will be repeated at 21:14 this evening.  The sea level will fall 1.6- 1.7 metres at these times, exposing areas of the seabed that are almost always covered in water for the rest of the year. That’s why it’s common to see locals marisqueando (collecting seafood) at the edge of the sea around these dates.

The high tide will occur at 15:03 in the afternoon, and is the highest tide of the year. Higher and lower tides mean stronger currents, especially when the tidal stream is at its strongest during ebb or flow tides. So, if you’re taking part in any water sports today, it’s a good idea to take a little extra care.  The high tides also mean that areas of the coast – such as some of the coves at Papagayo – can be cut off for several hours, while beaches such as the one at Playa Honda often see extensive flooding.

This phenomenon occurs every autumn equinox and is caused by the alignment of gravitational forces between the earth, moon and sun. The highest and lowest  tides are called spring tides (the name has nothing to do with the season) and occur twice a month at full moon and new moon (last night was a New Moon).  The spring and autumn equinoxes add another element that causes even greater tidal differences.

Neap Tide:  The time when there is least difference between high and low tide, occurring at the first and last quarter of the moon.

Ebb Tide: When the tide is going out

Flood Tide: When the tide is coming in.

Slack Water: The time between ebb and flood tides when there isn’t much movement.

Why is Spain being hit so hard?
Scroll to top