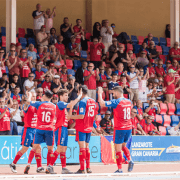 51-year-old Josu Uribe will be leading the Rojillos into their 2020/21 campaign. The veteran manager from the Asturias region of north-east Spain has had many highlights during his 30 years as a coach, most notably in 2002/03 when he led UD Las Palmas to fifth spot in Segunda A (Spain’s second tier). Ian Lane reports.

The veteran manager from the Asturias region of north-east Spain has had many highlights during his 30 years as a coach, most notably in 2002/03 when he led UD Las Palmas to fifth spot in Segunda A (Spain’s second tier). However, the following season he went one better, taking unfashionable Madrid side Getafe CF to the promised land, finishing the season in second spot and sealing automatic promotion to La Liga for the first time in the club’s history. Getafe have spent just one season out of the top flight since.

The Spanish Football Federation have not yet confirmed when the season will begin. If all goes well, though, mid-October seems to be the unofficial kick-off date.

The club has so far signed 14 players, the last of which was midfielder Kilián Benítez. The 24-year-old joined the Rojillos last January but because of Covid only managed to play six matches. In every game he impressed the Lanzarote fans, and this has to go down as a super signing for the club.

On an extremely sad note the Lanzarote Ladies team and our Regional Lanzarote B team have had to be sacrificed for the forthcoming season. The sole reason is financial: the club cannot gamble its existence with what has happened this year. Funding has almost dried up, so the club has had to take the decision to withdraw these two teams and hopefully bring them back at a later date, as happened with the B side during the financial crisis.

The club will be introducing its first new shirt in three seasons to commemorate its 50th Anniversary, and this is due to be available in early September from the shop in Costa Teguise together with some new polos and other products.

All details can be found on www.lanzarotefootball.com.

For all the information please go to:

Make friends and discover Lanzarote on a bike!
Friends and Enemies

The tide is high
Scroll to top