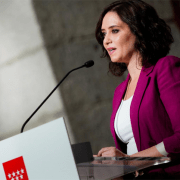 While Lanzarote and the Canaries appear to be successfully slowing down the second wave of coronavirus, it is still rising alarmingly in Spain as a whole. Why is the coronavirus taking such a toll on this country in particular?

Yesterday the national total of new cases was 14,389, the highest single-day figure since the end of lockdown, and the curve of new infections still a classic upward sweep. More than a third of those cases were registered in Madrid.

Spain has by far the highest incidence rates in Europe (267.8 cases per 100,000 people over the last 14 days, compared to France’s 158.7, the UK’s 58.9, Italy’s 30.5 and Germany’s 20.3). In the worst affected region, Madrid, the incidence rate is over 1000 in some areas. The capital faces several localised lockdowns to try and bring the virus under control, while its President, Isabel Diáz Ayuso, has received a storm of criticism for her handling of the crisis.

But why does Spain have such a high rate of coronavirus?

Social customs:  One of the most popular theories is Spain’s social customs. This is a country where family and friends of all generations kiss , hug and share food; a country where the British  idea of older people “shielding”by staying alone for several months is almost unthinkable.  “Epidemics are like fires: they can break out again due to a spark, but not all sparks cause a fire. The number of sparks in Spain is probably higher due to the spontaneity and the closeness of our personal relationships, “ Miguel Hernán, an epidemiology professor at Harvard University, recently told El Páis.

Family ties: Family ties are still hugely important in Spain, where childcare is often shared by parents and grandparents. The amount of families with more than one generation under a roof is also high – although this is not always out of choice – Spain’s spiralling rent and property prices, unemployment and low salaries mean that many young people simply cannot afford to leave home.

Housing: As well as multi-generational households, Spain simply has a different way of living than many other countries. Apartment living, in which many different households share common facilities such as doors, lifts, staircases and light switches, is much more normal here.

Unprepared health services: Under-investment in public health and care services in the years after the financial crisis of 2008 left many areas of Spain exposed during the first wave. During the second wave it’s the efficiency of tracking and testing units that is causing a problem in many areas. The lack of staff has forced the government to draft in hundreds of servicemen to assist in tracking and tracing.

Work practices: One of the worst affected areas of Spain, Aragón, saw cases rise when the virus began to spread among seasonal fruit pickers who often live in crowded, cramped temporary accommodation.  Meanwhile, Rafael Canton, head of microbiology at Madrid’s Ramon y Cajal Hospital has said that “a failure to declare symptoms among vulnerable sectors of society due to a fear of losing employment” may have contributed to the second wave.

Failure to observe rules: The failure of people – especially young people – to heed anti-covid measures has been mentioned by many analysts. This is because some of the largest outbreaks have been traced to parties and nightlife.

Too quick a de-escalation: Many experts now believe that Spain opened up too quickly when lockdown ended in June. Within just a few weeks, international travel and tourism was back and virtually unrestricted travel was permitted between all regions of Spain. Magda Campins of the Vall D’Hebron Hospital in Barcelona said “The de-escalation was probably done too quickly, moving from one phase to another without leaving sufficient time.”

Nevertheless, while many of the above factors may have played their part, several also apply to countries such as Portugal and Italy, which have had very different outcomes.

Passing the test
The tide is high