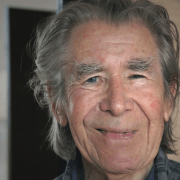 Christopher John Markham David was born on the 24th October 1926 in Eastbourne, England and died on the 26th December 2019 in Lanzarote, Spain, aged 93 years old. Widower of Gill David, he is survived by three daughters, Angela, Merilyn and Jessica. Christopher was also brother to Priscilla (deceased), Bede, Robin, Julian, Nicholas and Anthony.

Christopher served in the Army and studied at Ampleforth College. He entered the priesthood, tending parishes in Holywell, Rhyl, and Newcastle Emlyn. He taught Religion at Hartcliffe Comprehensive School before dedicating himself to helping others by spearheading charitable projects. He established two residential educational centres, Wick Court Centre, Bristol which he ran for 8 years, and Crosby Hall Educational Trust, Liverpool. In 1993 he and Gill took clothing and medicine to war-torn Yugoslavia, founding Humanitarian Aid.

They led supply convoys every two months for three years, with Humanitarian Aid continuing the work after their move to Lanzarote. Called to Ecuador, Christopher organized and raised funds for the building of a community centre in the Andean mountains. He coordinated significant financial support for Chambo seminary, establishing Friends of Chambo Seminary as a registered charity. Then came building two one-room schools in Peru and helping to bring water to thousands of impoverished families living in cardboard shacks on steep hillsides near Lima – the beginnings of Niños del Tercer Mundo.

Founded by Christopher and Gill, NTM is a registered non-profit organisation concerned with the welfare and education of children living in developing countries. Subsequent projects included funding a new school and teacher housing to serve an isolated mountain community in Ecuador; building education and health facilities in Kenya; building dormitories at Pangani Special School, Nairobi, allowing children to board, and have an otherwise unattainable education; facilitating access to clean running water for two Tanzanian schools; and providing funding for water pumps, educational supplies and school furnishings for two schools in Ethiopia.

Christopher composed many written works, including two published autobiographies: The Perils of Passion, reflections on a life revolving around two vocations, and $5,000,000 Reward, an account of his Yugoslavia experiences. In his final years Christopher was dedicated to creating faith- based compositions, poetry collections, meditations, and accounts of what life may have been like for those closest to Jesus. An accomplished painter, he loved Lanzarote’s landscape, as well as its music, and its people most of all.

His greatest reward came from serving the Roman Catholic church in Lanzarote by translating the Spanish sermons into English for the mixed-nationality congregations. His Christian faith was his rock. From childhood to his last moments it informed his life and the good he did in the world. Christopher touched the lives of thousands, from neighbours to those across continents. To say he will be missed is an understatement.

Make friends and discover Lanzarote on a bike!
Patera Tragedy