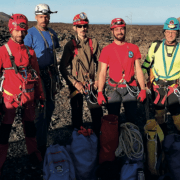 The Devil’s Chasm, a volcanic shaft in Timanfaya, has been confirmed as the deepest of its type in the world after a terrifying and gruelling descent by a mixed team of cavers from Lanzarote and The Netherlands. Laurens Smets, surveyor on the project, reports.

The Vulcan de Tinguatón, located in the Timanfaya National Park, is less than 200 years old – one of the youngest volcanos on Lanzarote. In its crater are six depressions, some of which have shafts leading down deep into the unknown. One of those shafts is known as “La Sima del Diablo” – The Devil’s Chasm.

The Italian speleo-geologist Francesco Saura described these shafts as “fissures feeding Strombolian lava mountains… and then evolving as geyser vents at the final stage. This type of volcanic cave is very rare in the world.”

Between 1965 and 1975, G. M. San Bernardo led expeditions into the caves (known in Spanish as simas). These shafts are incredibnly narrow at points, and these explorers were forced to stop by the technical limitations of their day.

In 2013, local cavers once again started to explore the shafts, reaching a depth of 65 metres before being blocked by a rock lodged in the shaft.

In late December 2019 a group of explorers from Lanzarote’s Vulcan Vertical club and Speleo Nederland took up their investigations again. Prospecting had already been done for some years and it was decided to install several hauling systems in the cave to deal with the tightness of the squeezes leading into the deep. Gaps and fissures of 23 – 25cm are quite common in this shaft system and were a real challenge to be overcome. It’s a physically gruelling and mentally claustrophobic experience that is definitely not for the faint-hearted.

After six hours of hard work the group of five finally reached an established, final depth of 101m, surveyed and verified with 3D laser apparatus. For scientists it is now confirmed that this former geyser shaft is one of the deepest volcanic shafts in the world. As for volcanic geyser shafts, it is the deepest.