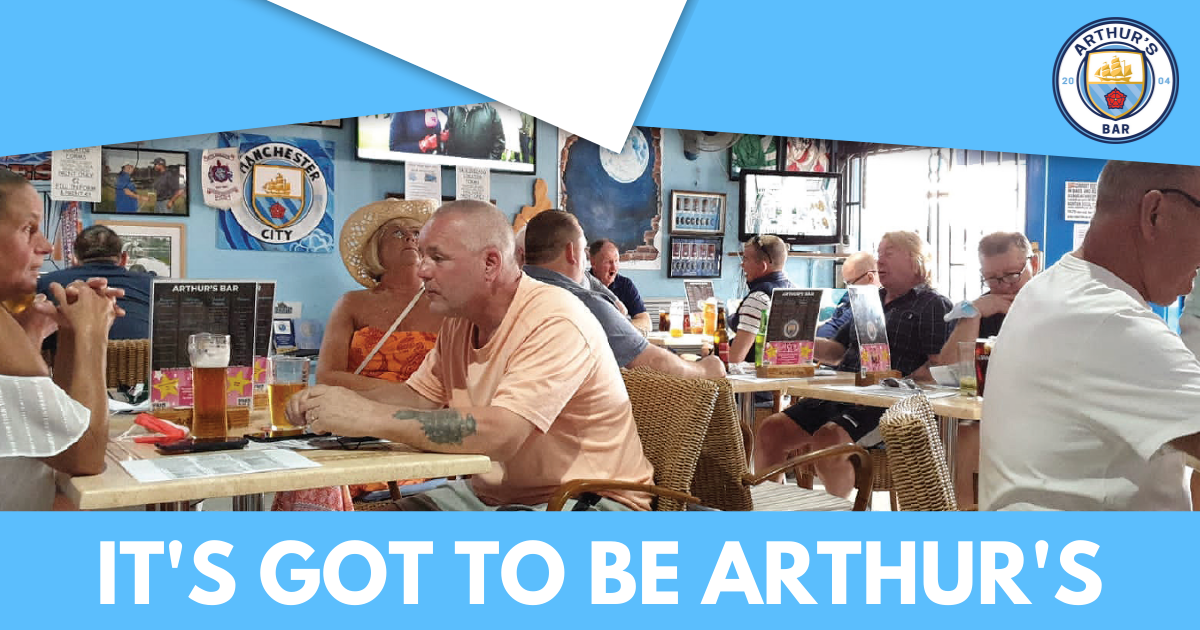 The story started many years ago, when Arthur was just four years old. His father was a Manchester United fan, and hoped that his son would follow in his footsteps, but one day his grandad took him to Maine Road to see Manchester City, kitting him out with a scarf and rattle.

Sky Blue ever since, Arthur and his wife Cath opened Arthur’s Bar in 2004 and have been there through thick and thin ever since. “Supporting City was in my marriage vows,” laughs Cath “Even though I’m a secret Blackpool fan.”

Arthur sadly died in 2019, but Cath carried on and the bar is going as strongly as ever, with the help of a brilliant team consisting of Caroline, Sian, Shona, Gee and Stephen. “We’ve survived a tropical storm, a plague of locusts, a global recession, an ash cloud and the Covid pandemic,” laughs Cath “So we’ll be here for a while yet.”

That confidence comes from the fact that Arthur’s Bar knows exactly what the punters want. “We do what we know how to do best, which is good, home-made pub grub,” says Cath. Sunday dinners are a highlight, and the bar regularly sells out on this day as it serves up delicious roast dinners.

You can turn up in the morning for a standard fried breakfast, or the legendary Belly Buster; or arrive later and choose from a wide and varied menu of wraps, burgers, sandwiches, jacket potatoes, pizza or main meals ranging from sausage and mash, beer-battered cod and chips or curries. All meals are prepared on the premises with the freshest and best ingredients possible.

There’s a large, sheltered sun-trap of a terrace, and the welcome is as warm as the weather. And, of course, Arthur’s is the place to go for the big matches. When the bar opened, Manchester City were still a yo-yo club, struggling at the foot of the Premier League. That all ended in 2011; and five League Titles, two FA Cups and six League Cups later, there have been plenty of celebrations at Arthur’s.

There’ll be more to come, too, as City top the league and enter the Champion’s League quarter finals and the final rounds of the FA Cup. The bar is also known by Rangers fans as “blue-nose friendly”, but all big games get screened, as well as the racing – when we met she was looking forward to the Cheltenham Festival.

Everyone is welcome at Arthur’s.

The heart & soul of Lanzarote
Scroll to top