Tucked away in the centre of San Bartolomé is the Museo Tanit – a jewel of a museum that deserves to be far better known. We visited last month to discover some of the fascinating treasures within. 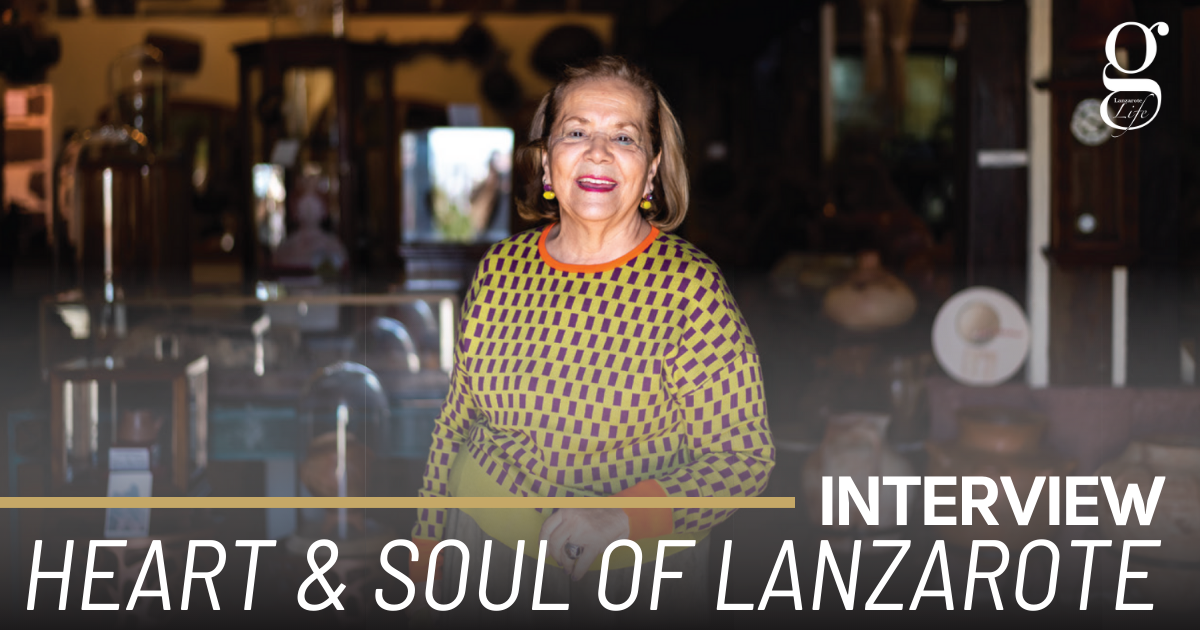 The Museo Tanit is located in a splendid 18th century building that was once home to one of the oldest wineries on the island. It was opened by José Ferrer and his wife Remedios Quintana in 2000, and the couple are here to greet us under the shade of a bougainvillea tree which casts shade on the lovely patio leading up to the museum and the gift shop/ ticket office, where laminated guides in English are available.

Doña Remedios takes time to proudly show off and explain many of the exhibits. She’s an artist herself, and the walls of the museum are lined with her works.

The bulk of the museum is in the bodega building on the left, where you’re greeted by the rich, heady fragrance of wine. Although not commercially sold, wine is still made and kept here, and large barrels contain vintage wines dating back to 1961. An image of Tanit, the Mediterranean Goddess of love and fertility, is straight ahead of you.

The Tanit Museum aims to reflect the lives of the inhabitants of Lanzarote from the very earliest times until recently: their culture, their beliefs, their hard work and their indomitable spirit. And it succeeds in doing so, in a charming, endlessly fascinating way.

This isn’t a slick, modern museum where exhibits are all tucked away behind glass cases. There are countless items, roughly organised by themes, and every few feet you can see or learn something new.

At the entrance there’s a music corner, dedicated to folk music in San Bartolomé. A special exhibition has been set up to display carnival costumes in an adjacent room, and there are other large areas and displays devoted to the wine industry, the soda industry, camelkeeping, basketry, fishing, traditional costumes and much, much more.

The museum is jam-packed with so many items and curios that it is simply impossible to take it all in at once. Doña Remedios shows us everything from the first mechanical wine presses on the island to antique darning needles; white Canarian traditional mantillas (headdresses) and beautiful funeral wreaths made of tin and wire for lack of real flowers.

Outside and around the corner you can find a small chapel dedicated to the Virgen of the Pine, an art gallery located in one the property’s five aljibes (water tanks) and some incredible mosaic floors that Doña Remedios created herself. One of these is in the shape of a bird, and a notice says that if you touch the bird’s tail with both hands, you’ll be filled with positive energy. We all take a moment to absorb the power, then move on to the downstairs area.

Downstairs, in the Princesa Ico room you’ll learn about the legend of the native princess who was put to a fiery test, see typical wedding headdresses, and find pistols, rifles a hand grenade and missiles from the island’s military past. There’s a photo of General Franco below an image of the Spanish Republic waving her red, yellow, and deep purple flag – “We don’t take sides here,” says Doña Remedios, “We’ll show everything because history happened.”

Another room contains a selection of children’s toys dating back almost two centuries. An impressive dolls house is on display, as is everything from porcelain dolls to a catapult. Outside is another peaceful courtyard decorated with wooden birdcages, overlooking a large garden where a fountain spouts merrily.

Throughout our visit, Doña Remedios busies herself straightening pictures and photographs, and she’s bubbling with ideas for the future.

The Tanit Museo lets visitors explore at their own pace, but even if you take your time, you’ll notice brand new things on a second visit. It’s also a beautiful, tranquil, and utterly unique place, located in the heart of Lanzarote.

Five things we learned at Tanit

1. The original inhabitants of Lanzarote carried amulets named tibicenas, carved in the shape of dogs or turtles, which were intended to ward off evil.

2. A poster announces a bullfight in Tías in 1972, 19 years before the Canarian Government banned the practice.

3. An ingenious typewriter with just two keys was used by a judge in the 19th century.

4. Local folk groups play scrapers made of animal bones and castanets made from limpets.

5. An intricate lock which was used to secure the first windmill in San Bartolomé is made almost completely out of wood.

The Tanit Museum, at Calle Constitución 1, San Bartolomé, is open Monday to Friday from 10 am to 2 pm. Admission to the museum is €6, with children under 12 admitted free.

Virtual circuit of Lanzarote
It’s got to be Arthur’s

When you wish upon a spoon
Scroll to top