After coming to a two year standstill during the pandemic, Canarian wrestling is back. With competitions now taking place every week all over the island, we wanted to find out more. So we contacted Charlea Bates-Morgan, a British 18-year-old who’s been grappling in the sand circle for most of her life, and she took us to a training session at the Club de Lucha de Tinajo (Tinajo Wrestling Club). 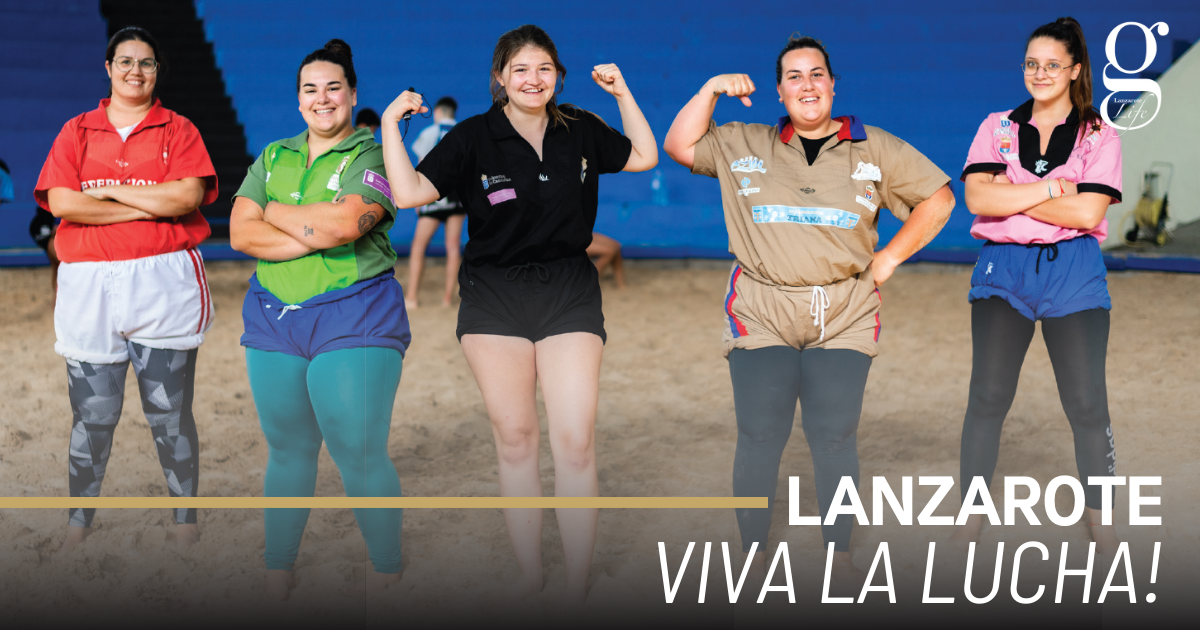 Charlea Bates-Morgan arrived on the island at 18 months of age, and grew up on Lanzarote. As a result, she’s typical of many young people on the island – switching from perfectly fluent English to pure local Canarian in seconds.

Charlea started wrestling early. “I was six years old”, she says. “My school held an exhibition of Canarian sports to celebrate Canary Day on May 30th. I was being bullied at the time, so when I saw the wrestling I instantly thought “That’s for me!”.

“When I first told my parents that I wanted to start wrestling they were a bit worried,” says Charlea, “But then I told them that it’s free – and that’s the magic word.”

She’s been wrestling ever since, first at the Jable Girls Club in Arrecife, which practiced on Reducto Beach, then at the club in Tinajo, where she travels by bus two or three times a week.

Patrick Cazorla, Charlea’s trainer at Arrecife and at the Tinajo Club, hails from Gran Canaria and back in the 90s, was a great Canarian wrestler, described as “one of the finest stylists in the sport”. He’s been working with wrestlers of all ages for, several years and his children, Daniela and Diego, both wrestle, too. In fact, Daniela’s one of Charlea’s team mates.

Patrick tells us that there are two things that all children need to learn when they first start the sport. The first is nobleza – nobility, a way of bearing oneself and showing respect to one’s opponent. “Wrestlers always shake hands before a bout, and the winner will also offer a hand to a fallen opponent,” says Daniela.

The other important starting lesson involves the clothes worn for the sport. “They need to be shown how to fold the hem of their shorts, how to tuck their shirt in and how to tie the cord so there are no embarrassing moments during the bout,” explains Patrick.

Once that’s been done, the young fighters learn a whole series of grips, blocks and feints known as mañas. A good wrestler, or puntal, will have a whole range of these at their disposal, quickly snatching an ankle or blocking an opponent’s body.

Patrick admits that kids today are more drawn towards football and basketball, but points out that wrestling costs participants nothing. “There are no federation fees, no insurance,” he says “we pay for everything.” Clothes, transport, even inter-island flights for competitions, are all subsidised.

Charlea and her team mates often get to seethe other islands. While male island teams will compete only with Lanzarote clubs, the limited amounts of female wrestling teams on the islands means that the girls often get to fight on Tenerife, Gran Canaria, La Palma or Fuerteventura.

All the girls say that their home ground in Tinajo is the best on the island, although one of them is quite impressed by the new stadium in Yaiza. Meanwhile Patrick, who has fought everywhere, says that the terrero at La Frontera in El Hierro, an open air arena carved into the side of a volcano, is the most beautiful on the islands.

After a few years when they usually ended up at the bottom of the table, the Tinajo girls are getting better and are currently 5th in the 10- club league. Charlea’s also been improving: “I’ve been learning to move faster, to get a bit more balance and, most of all, to do the unexpected”, she says, describing how her teammate Daniela – a natural left-hand-side fighter, has helped her switch between sides. Her training and increased skills have resulted in some exciting competitions, and recently she was the fighter who was permitted to approach the crowd, who traditionally throw money at favoured wrestlers after a match. “I made €6.50,” she smiles.

The pandemic hit wrestling hard, “Two years have been lost”, says Patrick, “And we were the sport that was most affected.” The tight tussling of la lucha is about as far from social distancing as you can imagine, and wrestling clubs suffered more than any others from the island’s tough restrictions on sport.

Charlea and Daniela both agree that wrestling has made them more confident outside the ring. “I’m not worried about bullying any more,” says Charlea. A fight can often have several spectators, but neither Charlea nor Daniela are nervous about performing in front of people – “It motivates me more,” says Daniela.

Canarian wrestling has had a tough time recently, but it’s a sport with a fiercely loyal following and an element of Canarian culture that inspires real passion. Charlea, who leaves school this year, has no doubt – “Wrestling will always be important to me, whatever I do or wherever I go.”

Airport updates
A fortress of culture

The height of excellence
Scroll to top