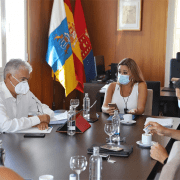 Cabildo President María Dolores Corujo and the island’s Mayors yesterday agreed to take stronger measures against individuals and businesses which do not comply with the legal measures that have been imposed to combat the spread of coronavirus.

It was agreed that local police forces, which are controlled by the Ayuntamientos, will be urged to carry out more checks and impose more fines. Corujo informed the Mayors that similar measures had been agreed with the commanders of the security forces and the Government Delegate in Las Palmas (who are in charge of the National Police and the Guardia Civil).

The meeting was called out of a sense of urgency, as cases increase on the island at a faster rate than ever. 35 people tested positive yesterday – the highest single day figure on the island yet.

Although the vast majority of cases are asymptomatic or mild, the island has recently seen six patients – all over the age of 60 – admitted to Arrecife’s Dr José Molina Orosa Hospital.

“During the last few months, we’ve limited ourselves to informing the public about their responsibilities in relation to this virus, “said María Dolores Corujo. “However, the recent increase in new cases and hospitalisations forces us to take stronger action and adopt penal measures that will make up for the lack of solidarity and responsibility shown by those who flout the regulations and put not only their own lives, but those of others, at risk.”

Teguise local police had already got the message on Friday, denouncing a number of establishments for not observing the distancing rules and individuals who weren’t wearing masks in public.

Total cases since start of crisis : 282

Total cases since start of crisis: 2,538