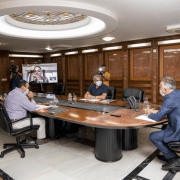 The Canarian Government has now closed nightlife down completely, prohibiting discos and cocktail bars from opening their outdoor terraces, as well as indoor spaces. The revised rules effectively put an end to live music and karaoke on the islands for as long as they remain in place.

The law, which was announced in the official Canarian bulletin this morning, extends measures introduced last week. Those measures permitted discos and cocktail bars to open their outdoor terraces, but this has now been forbidden as well. Other restaurants, and bars (those which generally serve food) will have to close at 1 am, and may not allow customers to enter after midnight.

The amendment of the law also means that any “multitudinous events and activities” will be subject to approval from the health authorities, whether they take place at day or night.

The decision is part of general tightening up by the Canarian authorities following a steep rise in infections on the islands, many of which have been traced to nightlife events.  Canarian Health Councillor Julio Pérez has also warned that special measures may be introduced for Las Palmas de Gran Canaria, the provincial capital which is the worst-affected area in the Canarias.

It is thought that the special characteristics of Las Palmas – its spectacular city beach, vibrant nightlife and family gatherings (many Canarians spend part of summer in the city), may have contributed to the high number of infections there.  Pérez said that, although most focuses of infection are in the private sphere, he could not rule out prohibiting gatherings completely.

Heat alert for the Canaries

The Canarian Government has declared a heat alert for the whole of the Canaries for today, 21st august, with warnings of maximums temperatures ranging from 30 to 38 degrees. Southern and western parts of the islands are likely to be the hottest, and a calima is also forecast.

AEMET, Spain’s national weather agency has limited its heat warning to southern and central zones of Gran Canaria  and Fuerteventura, excluding Lanzarote, but the Canarian Government’s Department of Security and Emergencies has decided to apply a blanket warning to all islands.