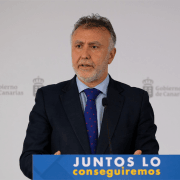 Canarian President Ángel Victor Torres has outlined a three-stage plan to reestablish tourism on the islands, opening them up firstly to inter-island tourism; secondly to Spanish visitors and finally, reestablishing international flights.

Torres told an online press forum that inter-island transport could be reestablished this month and Canarian airports could be opened to domestic Spanish flights at some point in June. However, he does not expect international flights to return until September or October.

“We’re going to do this in stages, “ Torres told an online press forum , “First, will be reopening the connections between islands, and we’ll need to work out ways of controlling people who use transport during the month of May.”

“By the start of June, with necessary measures in place, we can then start to talk about moving towards tourism from mainland Spain,” he added.

“The  goal is that, between July and August, we can recover some of our economy, first with Canarian tourism, then with Spanish tourism, “ said Torres. “We are aware that we’ll have to wait until September or October to start talking about international tourism.”

Britain’s much-criticised response to the crisis is also likely to influence decisions taken by Spain and the Canaries. The Balearic tourist minister Iago Negueruela recently said that “countries like the United Kingdom that have taken too long to adopt containment measures,” and suggested that tourism from Germany may be permitted first.  While Canarian authorities haven’t mentioned the UK specifically, their determination to make safety an element of the Canarian brand will surely promote a cautious approach towards their most important market.

Nevertheless, despite certain airlines announcing that they plan to restart flights in June, it seems that the Canaries will not return to anything like normality until the end of summer. This also appears to be a deliberate strategy, with the Canaries exercising caution in order to sell themselves as a safe location when flights do recommence, knowing that they are one of the few destinations in Europe  whose climate allows them an autumn and winter season.

An internal report by the Spanish Army forecasts second and third waves of coronavirus cases in winter 2020 and winter 2021.

The report predicts that cases will decline over the coming  summer as temperatures rise, but expects a second wave of infection to occur at around Christmas time. “Due to acquired immunity  of members of the public, and the state of preparedness of the country, this wave will be less intense than the current one”, the report says.

A vaccine is not expected to be available until early next year, and a third wave of infection in winter 2021 will be far less intense as a result of the availability of preventive treatments.

The greatest risk in the future will arise from gatherings of people,” concluded the Army’s report, and “strongly recommended” the use of smartphone tracking apps to control the virus.

Into Phase 1
Scroll to top