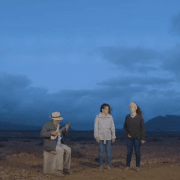 Arrorro, a traditional lullaby sung by generations of Canarian mothers to their children, is the official anthem of the Canary Islands.

This year, to mark a Canary Day that was almost entirely cancelled by coronavirus, the Canarian government has commissioned a new version of the song in memory of the victims of Covid 19 on the islands.

The song is performed by the brilliant Fuerteventura timple master Domingo “”El Colorao” Rodríguez and his daughters Julia and Ayla. The video was filmed on the plains of Mafasca in Fuerteventura, a place long associated with the souls of the dead., and features lines written and spoken by the Gran Canarian poet Saulo Torón (1885-1974):

I’ll deliver my soul to infinity

As infinity would give it to me

Pure and spotless! and one clear night