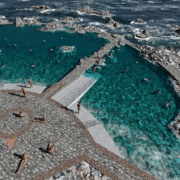 Yaiza Ayuntamiento is seeking approval for the project to build two “natural” pools on the seafront of the village of El Golfo.

The pools will be located on the rocky beach in front of the village of El Golfo itself, and will consist of two pools. A deeper, 2-metre pool for adults and sports swimmers, and a shallower, 1-metre pool, for children and learners. The pools will be filled by sea water at  high tide, like similar ones that can be found at Punta Mujeres, Charco de Palo and Los Cocoteros.

The pool are one of two projects planned for El Golfo, which will also see it’s main street resurfaced and renovated to provide pavements for pedestrians. Yaiza Mayor Óscar Noda said “These are maintenance and conservation works that will improves the lives of residents and the economy of the village, which is based on its excellent seafood.”

Of the pools, Noda said “they will increase the leisure options in El Golfo while respecting the environment and the surroundings.”

Yaiza’s Podemos party, however, disagreed strongly with the final claim. Their councillor, Ramiro Muñoz, described the pool project as an “environmental aberration” and said he would oppose anything that “cheapens the municipality and damages the landscape.”

Muñoz said El Golfo had greater need of an unfinished  water purification and sanitary project than a “cheap copy of an attraction in other resorts.”

Spain’s Health Ministry has given the go-ahead for the Canaries to enter Phase 3, the final stage of the lockdown exit plan, on Monday .

Health Minister Salvador Illa thanked Spanish citizens for complying with “the strictest lockdown in Europe, and one of the strictest in the world”, but called for caution in the final stretch of the lockdown exit plan, in order to avoid backsliding in the fight against Çovid 19.

Phase 3 will be the final stage before the Canaries enter what Pedro Sánchez has described as the “new normality”, leaving the State of Alarm that has applied since March 14th.

Phase 3 is not  likely to be as noticeable as Phases 1 and 2, as it extends freedoms that have already been granted rather than establishing new ones. Phase 3 gives permission for the following:

During Phase 3, the opening of nightclubs and discos will remain forbidden. The remaining time-slots governing exercise for the over-70s will also be abolished.

If all goes well, the Canaries should leave Phase 3 by 22nd June, on which date the State of Alarm is scheduled to end.

Song for the victims
Scroll to top