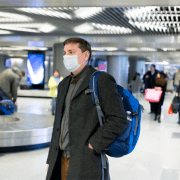 From Friday, every visitor to Spain from foreign destinations will be required  to observe 14 days of quarantine. The order was issued yesterday by the Health Ministry and will remain in place until the end of the state of alarm and any possible extensions.  Cross-border workers, haulage workers and transport crews will be exempted.

With this measure, Spain follows several other European countries who have introduced quarantine restrictions on foreign arrivals. Germany has had such measures in place for a month, and the UK, Ireland and France have also recently introduced similar restrictions.

This means that anyone coming from or going to the UK or Ireland over the next weeks will have to self-isolate for a fortnight on arrival at their destination. Currently the only direct international flights still operating from the Canaries are a twice-weekly service from Tenerife to London Luton and a weekly connection from Gran Canaria to Rotterdam in the Netherlands. However, the law will also apply to those who change at Madrid.

Meanwhile, the Guardia Civil have denounced Iberia Express after the airline operated a Sunday flight from Madrid at 70% capacity. Agents were waiting on the tarmac when the plane landed after social media had shown that the social distancing requirements on the flight were not being observed.

At the moment, there are three connections a week from Tenerife to Madrid, three from Gran Canaria to Madrid  and one weekly flight to the Spanish capital from Lanzarote and Fuerteventura.

No change on inter-island flights

On the Canaries, President Ángel Victor Torres has confirmed that inter-island flights will remain limited to those who need to travel for work purposes, for medical reasons and for carers.

Although Torres has recently discussed the prospect of opening up inter-island travel, he agreed  with his Balearic counterpart  Francina Armengol that now was not yet the time at a virtual forum yesterday. The two island leaders decided not to lift any flight restrictions just yet.

The Canarian President  said “Little by little, as the phases pass, we’ll move towards more air travel and we must look for ways to make flying profitable as well as ensure no one is infected.”. Torres added that “tests at the point of origin” were key to this.

An astonishing €42,000 was raised for Emerlan by the Lanzarote Musicians Unite online concert on Sunday.

Emerland is Lanzarote’s emergency volunteer service, usually seen in action by the sea or in the wilds whenever tourists or locals have got into trouble. However, since the lockdown started, Emerlan opertatives have been shopping and purchasing supplies for several people in need on the island.

The 12-hour concert featured 36 acts, and over 115 prizes were shared out in the draw that all donors qualified for. Well done, everybody!