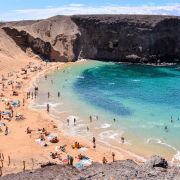 Spain’s National Research Council has declared that the risk of infection in the sea or in swimming pools is “highly unlikely.” The Council’s findings could influence the government’s rules on entering Phase 1 of the lockdown exit strategy, which much of Spain, including the Canaries,  is likely to enter on Monday.

Spain’s National Research Council has declared that the risk of infection in the sea or in swimming pools is “highly unlikely.”

The Council’s findings could influence the government’s rules on entering Phase 1 of the lockdown exit strategy, which much of Spain, including the Canaries,  is likely to enter on Monday

The report, by the third-largest public research body in Europe, also said that sand is unlikely to contain the virus because the “joint action of salt water from the sea, UV rays from the sun and high temperatures all favour the neutralisation of pathogens.”

The CSIC also stated that the use of disinfecting agents that is already widely established in swimming pools and spas was sufficient to neutralise the virus.

Nevertheless, the report concluded that the principal risk of infection on beaches and pools arises from the physical proximity of people and shared use of common facilities. “Leisure activities involving bathing usually mean a loss of social distancing measures,” it stated. Such measures are likely to be applied strictly before pools and beaches are reopened.

Hotel employees will face a much busier working day in the post-lockdown “new normality”, if the proposals of the Spanish Institute for Quality Tourism are taken on by government.

The proposals do not set a maximum percentage of  occupancy for hotels, but insist that social distancing be observed at all times. Lifts, for example, should not be shared by separate parties of guests.

The institute also recommends that meals are served pre-plated in hotel buffets; hotel staff wear masks and gloves at all times, and that unnecessary decorative elements and textiles such as carpets are removed from rooms.

Hotel workers are advised to wear their hair up, take off their jewellery and disinfect phones and glasses frequently. Their employers should grant them time to carry out personal hygiene such as handwashing, and also offer them a laundry service for work clothes and underwear.

The proposals have been submitted to the government and will be considered by the Ministry of Health before Monday’s Phase 1 entry.

Trouble in the capital

While the Canarian government confidently expects that  its five largest islands will be moved into Phase 1 of the de-escalation plan on Monday, Madrid’s request  now seems likely to be refused.

Yesterday, the Community of Madrid’s health director, Yolanda Fuentes, resigned in protest at her regional government’s application to enter Phase 1.  In her resignation letter, Fuentes said the decision to apply for Phase 1 was “not based on public health considerations” but rather “political and economic motives.”

Kick It!
Scroll to top