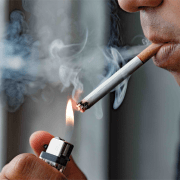 The lockdown offers the perfect opportunity to give up smoking once and for all. It’s never easy, but you may find that this is just the right time to tackle it.

Why give up smoking during the lockdown? For many people this is a stressful time, and smoking has always been used to combat stress. The Spanish government knows this. It has permitted tobacconists to remain open during the lockdown and buying cigarettes is regarded as an “essential activity”.

However, the lockdown also offers the perfect opportunity to give up once and for all. There are several reasons:

First, we all know that smoking damages your throat and lungs. And, right now, while

we’re surrounded by a virus that attacks those with weaker respiratory systems much more aggressively, that makes it a pretty stupid idea.

It’s not just cigarettes, either. Vaping may be less damaging in many ways, but don’t ever kid yourself it’s doing your lungs any good.

Secondly, with bars and restaurants shut for the near future, at least, many smokers will no longer find themselves in “trigger” situations. All smokers know how well cigarettes go with drinks or coffee, or after a meal. But this is a habit that’s easier to break than you think.

Finally, if you’re in close confinement with family members, they’re probably more than sick of you traipsing in from the balcony stinking of tobacco by now. If you actually smoke indoors, then you’re exposing them to higher risk – even if they smoke themselves.

You’ve got the time, so all you need is the inclination, and the most important thing you need to know about stopping smoking is that it’s all in the mind. Physical cravings diminish quickly, and there are no real withdrawal symptoms – instead, after a couple of weeks, it’s all psychology.

This involves getting rid of all tobacco and smoking paraphernalia and simply stopping dead. Some do it after a health scare, others work up to it in a planned campaign, as recommended by Allen Carr in his bestselling book. The Easy Way to Stop Smoking.

In many ways, it’s the hardest way to give up, as you’ll immediately notice nicotine withdrawal symptoms. Most of these disappear after four weeks, however. It’s also the easiest way, a simple, firm decision with no ifs or buts.

This method involves reducing the amount of cigarettes smoked every day until you finally stop smoking altogether.

Nowadays, however, it’s one of the least popular methods, with the rules easily broken and the underlying causes of addiction not really addressed. It’s also a method that tobacco companies have fully exploited, with “light” cigarettes and the packets of 10 that are now banned in the UK.

Patches, gum and sprays have all had limited success, and substitution methods are still widely supported by health professionals because of their ability to diminish withdrawal symptoms. However, others criticise them for not addressing the psychological aspects of addiction.

Vaping is another substitution that has helped millions kick harmful tobacco smoke. It’s undoubtedly healthier than smoking, but that doesn’t mean it’s good for you. All substitution methods suffer from the problem of abuse, too – you can simply end up hooked on the substitute.

Three ex-smokers at the Gazette offer tips that worked for them:

“For smokers, every day is full of cigarettes that are rewards for things you’ve achieved, or consolations for things that haven’t gone well. Once you give up, you realise exactly how enslaving this way of thinking is. Break dependence by telling yourself that cigarettes kill, and that you never “deserve” one.”

“I never enjoyed smoking after eating oranges, cleaning my teeth or chewing mints. So for the first few weeks after I gave up, I had shiny teeth, minty breath and plenty of Vitamin C. Win -win!”

“I realised that the only real memory I had of my grandfather, who died of heart disease when I was four, was the smell of tobacco. That’s not how I want my grandchildren to remember me.”