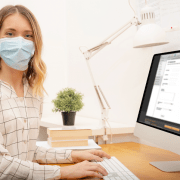 The Canarian Government indicated on Thursday that it is considering measures to make the use of masks compulsory.

The General Direction of Public Health on the islands is drawing up proposals for measures “adapted to the situation on the islands”, and Blas Trujillo, head of the Health Council, will present them to the Canarian government tomorrow.

The proposal will take into account the numerous outbreaks of coronavirus on the Spanish mainland and the decision of several other regions to make facemask use compulsory in all public places,  indoors or outdoors.

In the last few days, 10 of Spain’s 17 autonomous communities have approved measures to make mask wearing compulsory in all public spaces, regardless of whether social distancing can be guaranteed or not.

As we reported last week, Catalonia was the first community to make this decision following a worrying spate of outbreaks in the region. It was followed by Extremadura, the Balearics and Andalusia , while Murcia, Andalusia, Aragon, La Rioja, Asturias, have all announced similar measures yesterday.

The Canaries has been watching developments very closely, and although the islands have not seen any serious outbreaks yet, they are aware that the recent increase in visitors brings new health risks.

The cases of the Balearics, Murcia and Andalusia will be particularly interesting to the Canaries. Like the islands, these regions contain massively popular tourist zones, and have performed relatively well during the pandemic, with figures for accumulated cases and deaths per 100,000 people among the lowest in Spain. All have suffered worrying outbreaks since the end of lockdown, but these have remained localised and appear to be under control.

Murcia and the Balearics mentioned these outbreaks when explaining why they were introducing their mask laws. Andalusia, however, has chosen to introduce the law for a different reason – turismofobia. Juanma Moreno, President of the Andalusia’s Junta, warned on Friday that the practices of tourists in certain tourists resorts were causing phobia of tourists, because of their refusal to follow safety measures.

“In some small municipalities a type of turismofobía is growing because visitors arrive without masks, which is not good for the economy nor health” said Moreno. He also mentioned that local population were relaxing on mask use after five very hard months. Currently in the Canaries, masks are only compulsory when the minimum distance of 1.5 metres cannot be observed, indoors or outdoors. In practice, this means mask use is widespread indoors , with most shops insisting on it.

Winter season to be “good considering the circumstances”
Scroll to top