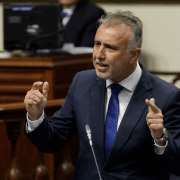 Canarian President Ángel Victor Torres has claimed that the Canarian Winter season is likely to reach 60% of the occupation levels of last year.

The regional President also said that tourist numbers so far had been better than expected, mainly because of inter-Canarian tourism and visits from mainland Spain.

Torres said that the summer season would be a testing ground for the Canarian high season of Winter, which he predicted would not be the same as previous years but would be “good considering the circumstances”.

However, he admitted that the “same uncertainty” about tourism continues, given the possibility of new outbreaks or increases in transmission.

Torres also pointed out that there could be other “dark clouds” on the horizon apart from the coronavirus, singling out the collapse of an airline for special mention. In this scenario, Torres insisted that the states involved would have to rescue the airline.

Earlier, at another press conference, Torres once again raised the issue of PCR testing at origin, urging the EU to reflect and introduce such tests at airports. Torres claimed that other countries including France “were talking about” this measure.

However, PCR testing at origin has been discounted by the Spanish government and European airline authorities, who say it would be logistically impossible to carry out on thousands of passengers.

The Travesía a Nado del Río, the island’s most popular swimming competition , has been suspended this year because of the coronavirus. The event was due to take place on October 10th.

The 2.6 kilometres dash across the strait between Lanzarote and La Graciosa is one of the most popular sporting events on Lanzarote, but anyone who has seen 700 swimmers jostling shoulder to shoulder on the ferries to Lanzarote, on the shore before the start or even lining up for a plastic plate of barely-warm paella afterwards will know that it is not an easy place to enforce social distancing.

The event was also called off last year due to bad weather, and last year’s entrants were offered free entry to this year’s race.