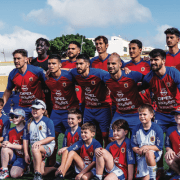 The premature end of season left UD Lanzarote in 14th position with eleven matches remaining, all of which have been cancelled. Ian Lane reports on how Lanzarote’s league will play out, with big changes to come next season.

Whilst the Rojillos have ended their campaign, the top four teams are far from finished. CD Marino, SD Tenisca, UD San Fernando and UD Tamaraceite will decide the playoffs between 18th to 25th July on the island of El Hierro.

Matches will be decided over 90 minutes with no extra time or penalties. Should the game end in a draw then the team who finished the league in the higher position will go through. This gives league leaders Marino a powerful advantage in each match they play. The winner of the playoffs will be promoted to Segunda Division B (Third Tier).

At the other end of the table there will be no relegations. This means bottom club UD Villa Santa Brígida, who were nine points adrift, have been spared by the virus. Two clubs from Regional Preferente will be promoted to the Tercera Division (Fourth Tier) expanding Group 12 in the Tercera Division to 22 teams. There is a possibility that Group 12 could be split into two leagues of 11 teams each.

There’s no date for the start of next season yet, but the earliest possible date appears to be in October. The Rojillos have already begun to assemble a squad, with seven players signed and many others close to putting pen to paper.

Official shirts & club merchandise are available from Ian on 0034 649963943, info@mercancialanzarote.com and can also be bought from the shop online at www.lanzarotefootball.com.