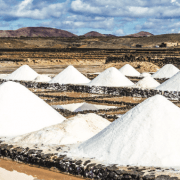 Yaiza Ayuntamiento has published a teaching guide for families and schools to mark the 100th anniversary of the death of Lanzarote’s most famous poet, Víctor Fernández Gopar “El Salinero” (The Saltmaker).

The teaching guide is introduced by two microscopic pink algae called Duna and Liella who live in the Salinas de Janubio, and the guide includes information and activities related to the island’s most important saltworks and the local poet who was its first manager.

Born in 1844 at Las Breñas, the young Víctor worked as a shepherd, but had a desire to learn to read and write. In those days there was no school in the south of Lanzarote, so he asked his church and a neighbour to teach him.

Later, Gopar was employed to help build the famous saltworks at Janubio, which are still functioning today. He became a master salt maker, which gave rise to his nickname, but it is his lyrical output that has made him famous on Lanzarote, where the main theatre in Arrecife now bears his name.

Gopar never described himself as a poet. His work is deeply rooted in local oral culture of coplas – rhyming couplets that are easily adapted to song, and it is in the repertoires of local parrandas (folk groups) that his work has mainly survived. But survived it has, mainly due to his unblinking realism, sense of social justice and dry, satirical humour.

An example of this are the self-effacing lines he wrote about himself:

But Gopar could be a savage critic of society and the Church, as well. In one of his most famous verses he attacks the hypocrisy of local clergymen:

We all must die
When God commands,
And they escort the rich man
With the big cross.

And if he’s very poor
nobody thinks it’s strange
That there’s no cross at all
To accompany him.

So it can be seen
That for the poor fellow
There is no cross of Christ.

Pull up a Stool
Scroll to top