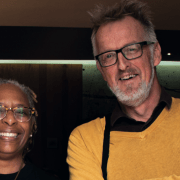 Charmaine Arbouin is the British Consul for Andalusia and the Canary Islands. Based in Málaga, she covers the regions of Spain with by far the largest concentration of British residents. We pulled her to one side for a quick chat.

Charmaine, the team’s changed a bit with a new Ambassador and a new Vice Consul, Jackie Stevenson, in Las Palmas. What are your impressions?

It’s great. We were sad to see Simon Manley go, but he’d already occupied the post longer than expected… Diplomats generally spend three or four years on tours, and Simon would have done the same if something hadn’t happened in June 2016. Brexit meant that he was kept on much longer.

It’s great working with the new Ambassador. He speaks fluent Spanish, he has prior experience at the Embassy and you’ll find out what type of person he is at the talk today. It’s also good to have Jackie Stevenson step into Esther Martín’s shoes as Vice Consul in Las Palmas. She’s been there a while, and as an ex-tour operator employee, she knows the islands and the needs of British citizens well.

Can you explain why the Embassy and Consular Service have terminated the contract of the Brexit Support Officer just when British citizens may need this service most?

That appointment was made possible last year because that was when government allocated funds to deal with Brexit. At that time we were very much in “no deal” territory, and there were worries about the welfare of potentially vulnerable people in Spain, especially older residents. As a result, Las Palmas and Tenerife

both got a support officer, and there were various events held around the island. These appointments had results as well, I think. The amount of British citizens to register as residents in the last year has increased.

Now we’re leaving with a deal, I think a lot of those fears have been allayed.

What about the negotiations with the Spanish government that will take place this year?

I think I’m lucky to be at the Consulate, because that won’t be my department. It’s the citizens rights matters that have mainly been addressed in the Withdrawal Agreement that affect my work. The negotiations on trade will happen elsewhere.

And what about residency matters? Surely there will be administrative changes as the UK becomes a “third country” outside the EU?

Of course, but right now we don’t know the details. Sooner or later, British citizens will have to apply for a new ID card, but we don’t know what it will be like – there are already nine varieties of foreigners’ ID cards in Spain.

But currently the advice remains the same. If you live here, get registered on your local padrón become a resident and change your driving licence for a Spanish one.

Among issues that arose during the Q & A session with the Ambassador, the following questions were clarified:

• European Health Insurance Cards (EHIC) will remain valid and can be used in other EU countries including the UK until the end of 2020. Arrangements following that date have not yet been finalised.

• The UK’s introduction of an “Australian-style” points system for immigrants may affect the flow of casual British labour to Lanzarote depending on whether Spain introduces reciprocal measures.

• Before applying for Spanish, Irish or other EU nationalities, you are urged to get legal advice, as this can affect your status in inheritance matters.

• There will be no supranational “European citizenship”, as mentioned by Guy Verhofstadt, available for British citizens.

• Healthcare agreements under the S1 form are guaranteed under the withdrawal agreement and will continue indefinitely.

• Many more answers are available at livinginspain.gov.uk. If you have any further queries, get in touch with Gazette Life and we’ll try to help, or put you in touch with someone who can.

Memories of Salt
Scroll to top