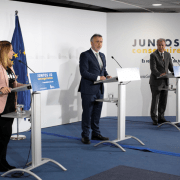 38,000 households in the Canaries will receive emergency payments ranging from €367 to €478 to  help see them through the month of May. The Canarian emergency payments were announced by Canarian President Ángel Victor Torres and Social Rights councillor Noemí Santana yesterday.

The payments will go to the poorest and most vulnerable families, and can be claimed by residents who can show that are receiving no wages, pensions or benefits during the lockdown. Torres said “This is a historic document to assist those in the greatest need, and will become a reference point for other Spanish regions.”

17,000 families living in public social housing will also be exempted from rent payments during May, the Canarian housing Councillor Sebastián Franquis announced at the same conference.

As the fifth week of the lockdown approaches, official figures for the Canaries remain encouraging.

In the month of April, the daily amount of new cases on the islands has not exceeded 74, in contrast to several days in late March when it exceeded 100 (with the worst daily total of 147 new cases recorded on 27th March). The last day new Canarian cases totalled more than 50 was on the 7th April, and  during the last week the number has not exceeded 30.

On Lanzarote, seven days in April have brought no new cases at all and four have seen just one. The largest rise occurred on 29th March, when 13 new cases were reported. Since the 2nd April, only one day has seen more than 3 cases on Lanzarote.

As for deaths on the Canaries, these have remained in single figures every day for a fortnight, and currently stand at a total of 115. Almost two thirds of these deaths took place on Tenerife, with only three occurring on Lanzarote – the last on March 26th.

Boys and girls come out to play
Scroll to top