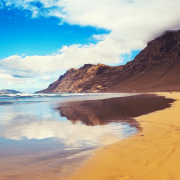 “Nothing has changed on Lanzarote, because there are places in the world that will always be special”.  This is the message of #LOVELanzarote,  a video created by Lanzarote’s Tourist Board that has already been shared over 200,000 times on social media.

“I’m still listening to the the soft whisper of your voice ….still in the embrace of your sands, your shining coasts bathed in sunshine, your nights of infinite stars.. we’ll go forward together, applauding those who care for and protect us, because every part of me belongs to you,” – these are among the poetic sentiments expressed in the 97-second love letter to the island.

The video, which features astonishing aerial footage of some of the island’s most popular and most remote places, was commissioned to give a message of hope for the future on an island where tourism has been temporarily wiped out by the coronavirus crisis.

The Cabildo’s Tourist promotion Councillor, Ángel Vásquez, said the aim of the video “is to keep the essence of our island alive in the memory of  tourists: the landscapes that are unique in the world, the unmatchable sensations and the special emotions that Lanzarote arouses in everybody who visits us.”

However, it is becoming increasingly clear that the reestablishment of the tourist market that the island enjoyed until the 14th March will take time, with international tourism one of the last elements of the islands’ economy to return to normal.

Canarian President Ángel Victor Torres has reached an agreement with his counterpart in the Balearics, Francina Armengol, to petition the government that opening airports and cruise ports will be the final step in the lifting of the lockdown restrictions. “This will maintain our isolation, which is already having good results, for longer,” Torres said.

The presidents of the island communities will also ask Spain’s government to take their reliance on tourism into account in their economic plans.  “The sector will not recover overnight, and it’s necessary to protect jobs on both archipelagos ” they said, requesting an extension of ERTE (furlough) conditions that will last beyond the state of alarm.

Over 27,000 small businesses employing almost 200,000 workers have applied for ERTE payments in the Canaries since the lockdown commenced.