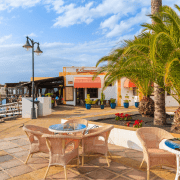 The Cabildo and the island’s seven Ayuntamientos have agreed to suspend the tax charged on bars and restaurants for occupation of pavements and other public spaces, and to allow these businesses to extend their terrace space by 100%, where possible. The measure has been temporarily granted by authorities because restaurants and bars are only permitted to open exterior terraces at 50% capacity under the current Phase 1 laws.

More space is used up by the legal two-metre distancing requirements between tables.

The laws limiting use of public space are required to prevent businesses cluttering pavements with fixtures and furniture, allowing pedestrians, including the disabled and parents with pushchairs,  to pass freely.  However, the absence of tourists means that this is not such a pressing concern at the moment.

The measure will last at least until the move into Phase 2 of the lockdown exit plan and perhaps longer. The authorities also agreed to postpone the payment of certain taxes until December, and to study ways of reducing them for periods when there was no economic activity.

The agricultural markets at Arrecife, (Saturday 9-2) Haría (Saturday, 10-2.30) and Costa Teguise (Tuesday 9 – 2) were also permitted to reopen, along with the Sunday morning market at Mancha Blanca (9-2). Under Phase 1 regulations, markets are permitted to operate with 25% of the normal amount of stalls and 30% of the permitted public. Social distancing measures are likely to be closely observed, and if you do go to market this weekend it would be a good idea to go prepared with mask and gloves.

“I owe them my life”

Carlos Alemán, one of the Guardia Civil officers usually stationed at the César Manrique Airport in Lanzarote, was discharged from the Dr José Molina Orosa Hospital in Arrecife yesterday  61 days after his admission. 36 of those days were spent in Intensive Care.

A guard of honour formed by his colleagues was waiting at the hospital doors to receive Alemán as he left to warm applause from dozens of nurses, doctors and health workers. Paying tribute to the health workers, he said “I owe them my life. They were working for me every day – the good days and the bad ones. “

“The applause is for them,” he continued. “I did what I had to do – fight for my life – but it’s thanks to them that I’m here.”  Aleman also received a congratulatory videocall from Vicente Reig,  the Guardia Civil chief of Las Palmas. “At your service, Colonel,” he said, before expressing his keenness to return to work after a short rest.

Aleman’s discharge means that there are now just three active cases of COVID 19 on Lanzarote, all of whom are in the island’s general hospital, with two continuing in the intensive care unit.

Bouncing Back: The Ally Shop
Scroll to top