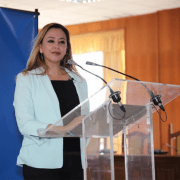 Dolores Corujo, President of Lanzarote’s Cabildo, has asked the Canarian  President Ángel Victor Torres to establish an “eastern annex” consisting of the islands of Lanzarote and Fuerteventura, when he draws up his reconstruction plan for the islands.

In a sober, speech, Corujo said “the level of reliance on tourism on Lanzarote is so high that all the official measures we’ve taken will not be sufficient,” and called for political, trade union, business and social forces on Lanzarote to come together in a Grand Pact. She also called for the irrevocable establishment of an “Eastern annex”, in which Lanzarote would join forces with Fuerteventura.

Corujo reminded the Canarian government that Lanzarote and Fuerteventura are the two islands where the economy and employment are likely to be most affected by the coronavirus crisis. In April, unemployment on Lanzarote rose by 42%, and on Fuerteventura the figure was 47%. Over 60,000 workers are affected by ERTE (furlough) schemes on the two eastern islands.

Corujo stated that she had approached her party colleague Blas Acosta, President of Fuerteventura’s Cabildo, to discuss the establishment of the annex and obtain special consideration under the reconstruction plan.

Corujo’s pleas for special treatment because of Lanzarote’s reliance on tourism is one that Torres himself will recognise well, as he has used it successfully when representing the Canaries to the Spanish central government, often teaming up with his counterpart in the Balearics.

Corujo stressed that there was no element of “insularity “ in the  Eastern annex proposal. However, the idea of Lanzarote and Fuerteventura joining forces to wield more power in a region dominated by Tenerife and Gran Canaria is not a new one. The “Eastern axis” has previously been proposed by other political parties and is one of the motivating forces behind the current extensions of Playa Blanca and Corralejo harbours.

The Spanish government has permitted La Graciosa, El Hierro and La Gomera to enter Phase 2 of the lockdown exit plan after the good results of two weeks in Phase 1. From now on, the islands will be able to open the indoor dining areas of bars and restaurants

Meanwhile, the Health Minister Salvador Illa announced modifications to the Phase 1 rules that will apply on Lanzarote from this Monday 18th May.

From that date hunting and fishing will be permitted; business premises of over 400 square metres will be able to open as long as they carefully mark out spaces for customer service according to the laws. Local authorities will also have the option of opening public day centres.

Phase 2 requirements were also altered meaning that, from Monday, La Graciosa can have meetings of up to 15 people and would also be able to open its shopping centres, if it had any.

After several weeks of closure, food markets will now reopen in a restricted capacity.

Today will see Arrecife’s Saturday morning market reopen in the Recova – the courtyard directly behind the Ayuntamiento building which was the historical site of Arrecife’s original market.  The Recova is just a few metres away from the palm-lined square in front of the church of San Ginés where the market is usually held.

Today will also see the market in Haría’s main square open from 8 am to 2.30 pm, although only stalls selling food and groceries will be permitted to set up. The usual craft market will have to wait.

The Sunday market at Mancha Blanca will go ahead tomorrow morning, and Costa Teguise’s Pueblo Marinero will host its farmers market on Tuesday morning.

Sánchez to ask for “final” month-long extension
Scroll to top