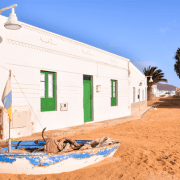 The Canarian Government has requested that the islands of La Graciosa, El Hierro and La Gomera be allowed to pass onto phase 2 of the lockdown exit plan next week. The three islands, along with the Balearic isle of Formentera, were permitted to enter Phase 1 a week earlier than the rest of the Canaries, as none of them had any active cases of coronavirus.  After 10 days, that remains the case, and authorities are satisfied with progress on the islands.

If the rest of the Canaries continue to make good progress, it is likely that they will be permitted to enter Phase 2 a week later.  Lanzarote has only recorded one new case in the  month of May, and currently has just four active cases, all in the Dr José Molina Orosa Hospital.

Low immunity in the Canaries

Further information on the  nationwide random antibody tests we reported on yesterday shows that the Canaries have a particularly low level of immunity to COVID 19. While 5%  of the Spanish population that has been exposed to the virus, that figure is just 2.1% in Tenerife and 1.2% in Gran Canaria. Figures are likely to be even lower for Lanzarote, whose results were not included in the preliminary results.

The study has also shown that a third of those who tested positive for antibodies do not recall having any symptoms in recent weeks, suggesting that the level of asymptomatic sufferers may be higher than previously thought.

Hospital “trying to make up for lost time”

Lanzarote’s director of health, José Luis Aparacio, referred to the tests in an interview with Diario de Lanzarote recently, saying “The  up side is that low figures show that confinement has worked; the down side is that they show we are still vulnerable. There is no herd immunity here, but the price for herd immunity is too high in terms of lives. It’s better this way.”

Aparicio also explained that, while the hospital was preparing for a possible second wave of infections, it was also getting ready to return to some kind of normality. “We are sorry that people who may have been waiting six months for a hip operation, have had to add two months to their waiting,” he said.  “The intention is that all plans to reduce waiting lists be extended, we’ll increase operations and try to make up for what has not been done in this month and a half.