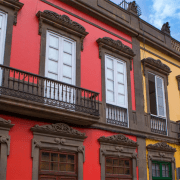 The balcony is the only outdoor space many Spaniards have, so let’s have a closer look at how this fixture has become so important to a nation, and how that has been even more true in recent weeks.

The most famous balcony in literature is, of course, the one which Romeo scaled to snatch one precious night with his beloved Juliet. However, the classic “Juliet” balcony does not project from the house wall at all, and is instead, merely a set of bars that allow a person to lean and look out over the scene below.

The more familiar modern balcony is a result of stronger materials, and is generally an urban development – In the days when rubbish and even sewage was thrown into the street, an upper floor balcony offered a little fresh air and sunlight.

Spain seized the idea of the balcony and made it a central part of the country’s architecture. Go to Seville or Granada to see vintage wrought-iron and wooden balconies, while on the Canaries you can see the way the feature became a defining element of Spanish colonial style in the Vegueta district of Las Palmas or along the seafront of Santa Cruz in La Palma.

Balconies were also an important aspect of social life among the upper classes, allowing them the opportunity to see and be seen at certain hours, often on a Sunday. It was literally a case of keeping up appearances.

In Spain, apartment living is much more normal than it is in Britain, for example. Millions of people live in apartment blocks with a central entrance, and these multi-story buildings often have balconies.

This meant the balcony became more accessible to people on a lower income, and as a result its use also changed. Balconies suddenly became spaces to dry clothes, to grow herbs and flowers or to store larger items. They’re also places where families will spend time in the evening, perhaps enjoying a drink or even chatting with neighbours on their balconies.

Looking Out on Life

The arrival of Spain’s lockdown during the coronavirus meant that, for millions of Spaniards, their balcony was the only opportunity to get a breath of fresh air. As a result, balconies have become a central part of the lockdown in a way that could never happen in countries further north.

The 8pm (CET) rounds of applause for health workers largely take place on balconies, and it’s interesting to note that they don’t happen as much when there are no balconies opposite. There’s a lot less community spirit to enjoy when you’re clapping into open air.

Rainbow posters and banners painted by children and inscribed with messages of hope can also be seen draped from many balconies, a welcome change from the Spanish or Catalan flags that recently represented the polarisation of a country. These flags tell us that “everything’s going to be alright” – a reassuring message of optimism that has been necessary among the horrifying news of recent weeks.

Social media has also been full of music performed from balconies by talented Spaniards who have seized the lockdown to share something special.

However, there have been downsides, too. One is the rise of the “balcony police” who, according to your outlook are either concerned citizens or interfering busybodies who shout at and shame individuals they feel are breaking the lockdown. Backed up by social media, their campaigns have shown concerning signs of ignorance and intolerance.

But they also sum up one of the great appeals of the balcony. Not only do they allow you to look out on life – any curtain-twitcher with a window can do that – they also allow you to step out there and participate in it

Make friends and discover Lanzarote on a bike!
Kick It!