Johan Wagenaar and Ilse Verlaan from Bike Sensations both took part in Lanzarote’s Ironman earlier this year. For Johan, who has completed seven Ironman races, four of them on Lanzarote, it was nothing new; but for Ilse, it was her first time. We chatted to them about the experience. 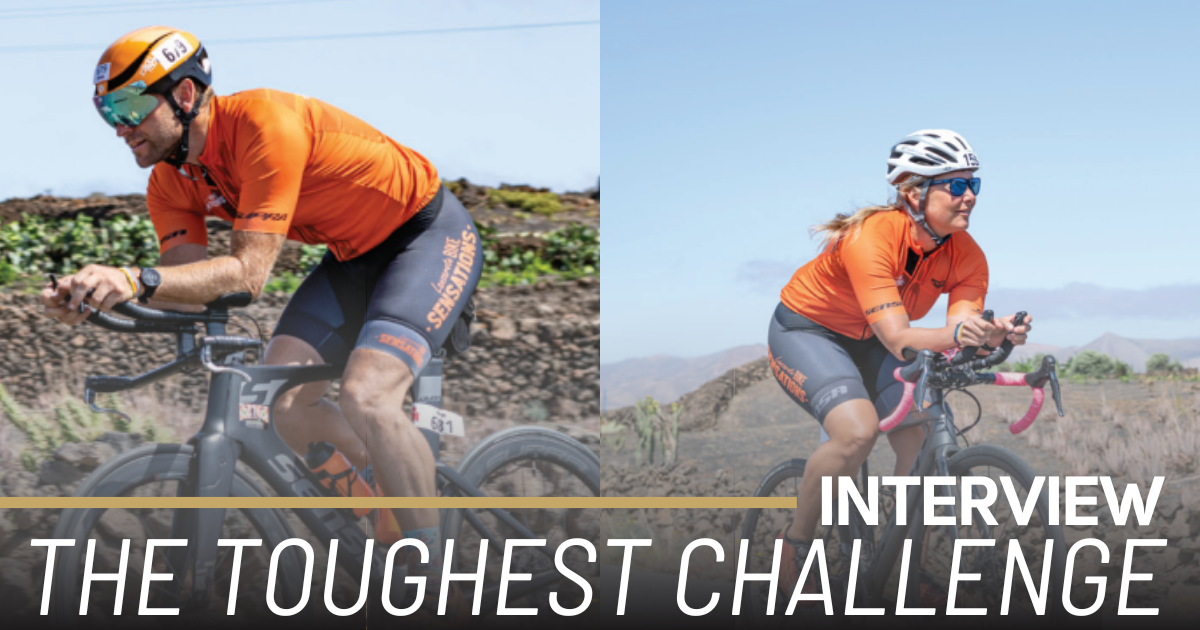 Johan: It was tough. Wind is the most important factor in the cycling stage. It’s fine if it’s behind you, but this year it was against us all the time – every climb, up to Timanfaya, to Mancha Blanca and the Mirador, the wind was against us.

What about the heat and sunshine?

Johan: That depends on the athlete. Some prefer cool weather, but others like it. I’m used to it, so I see it as an advantage.

How much preparation did you both do?

Johan: I started training about five weeks ahead of the event.

Ilse: As a beginner, I took a lot more time, and started training at least six months ahead. I’ve never done a full triathlon before – the longest race I’d done up to now was the Ocean Lava Race last year. I knew it was going to be tough – everyone on the island knows about the Ironman – so I made sure I was prepared.

Which part of the race was the worst for you, Ilse?

Ilse: The marathon, absolutely. That’s when the tiredness really catches up with you. I never felt that I was going to give up, but the support of the spectators really helped me on. The swimming was better than I thought it would be, but I think the staggered start helped a lot with that.

I’m not one of the elite athletes – it took me 16 hours to finish the race, but it’s still a huge emotional rush to finish a challenge like that. I was so proud afterwards.

Are the spectators important?

Johan: Absolutely. They cheer you on and cheer you up, and if you start walking, they’re the ones who’ll urge you to pick up your pace. This year the route was changed so that the marathon went to Arrecife, and that meant lots of stretches with no supporters, which makes it a bit of a drag.

Ilse: They were at Playa Honda, which was great. The day after the race I was tired and very stiff, but I went out for a walk in Puerto del Carmen wearing the t-shirt, and plenty of people congratulated me. It’s a great feeling to finish the race. There are other races on Lanzarote, but the Ironman is the Ironman.

What were your favourite parts of the race, Ilse?

Ilse: The start. That’s a really exciting spectacle. And, of course, the last few kilometres before the finishing line. It’s amazing to have all those people supporting you.

Johan: That last lap is nothing but fun. It’s a great feeling.

You both work at Bike Sensations, so you must have been pretty busy before the race, too.

Johan: All our bikes were hired out for the race and we assembled 90 more. Athletes bring their bikes dismantled in boxes, and as they’ve paid so much to get over here and take part, they want to be absolutely sure that everything’s in the best working order possible.

Ilse: I took three days off before the race just to get into the right frame of mind.

You’re both out taking bike tours around the island all the time. Is the situation on the island improving for cyclists?

Johan: Yes and no. It’s good that cyclists have been given priority on routes such as the side road from Tahiche to Guatiza and the smaller road from Yaiza to Playa Blanca, but that last road is in a terrible state. I’d love to be able to chat to the Cabildo President and tell her about dangerous situations such as the road in Mancha Blanca.

I also think it’s crazy that they’ve banned cyclists from the Femés road to Playa Blanca. It should be the other way round – it’s actually a little faster and saves fuel for cars to take the main road.

Johan: I’m thinking of trying one of the Trail Bike challenges – the Haría or Tinajo Xtreme, for example. Maybe not this year, but soon.

Craft and laughter
Make friends and discover Lanzarote on a bike!