Lanzarote is in constant motion, a volcanic island that is shifting and trembling all the time. These movements are constantly measured and monitored by specialists here and around the world. We visited the source of this information, the Lanzarote Geodynamic Laboratory, last month… 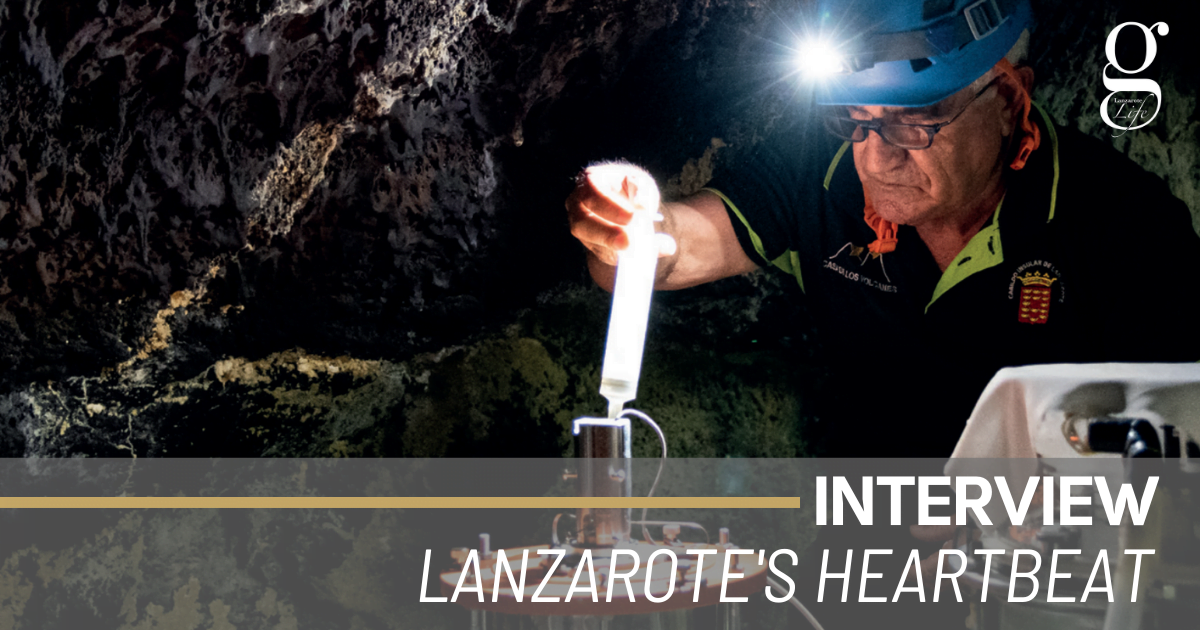 Orlando Hernández has been a technician at the Laboratory since 1989, working there alongside Jesús Soto at first. “The laboratory is Lanzarote itself,” explains Orlando, “There are three main modules at Cueva de los Verdes, Jameos del Agua and another 35 points where measurements can be taken if necessary.”

Orlando leads us underground, along the path that is trodden by hundreds of tourists every day, until we arrive at a metal fence blocking a lava tunnel. Orlando unlocks it and we pass through, finally arriving at a large cave with a pre-fabricated building plonked right in the centre.

Inside and outside of this structure there are several instruments: gravimeters, inclinometers, extensometers, seismometers, luxometers and others, all designed to give continuous information on what is happening here, 30 metres under the earth’s crust. They measure everything from the temperature; the types of gases found in the tunnel and the “land tides” that cause tiny movements in the earth’s crusts that are related to the gravitational pull of sun and moon.

Communication has improved so much in recent years that Orlando and his colleague Jaime Arranz, who is currently the director of the Casa de los Volcanes, rarely descend into the cave these days. When they do so it’s mainly to check and maintain equipment.“It’s actually better that way,” Orlando tells us. “Any human presence affects the measurements; from footsteps that are registered on seismographs to changes in temperatures caused by turning the lights on or opening the door of the prefab.”

Just one look at the seismometer displayed on the computer screen shows that Lanzarote remains an active volcanic zone, with constant minor tremors registered on screen. When I stamp my foot, the line suddenly zig-zags sharply, showing precisely how sensitive the instruments are. “Any earthquake in the world above magnitude 6 will be registered here,” says Orlando.

The equipment in this cave has been assembled over several years. Some instruments date from the early 90s and are still working perfectly today: “If it works, why replace it?” says Orlando.

Today, Orlando carefully notes down the exact time of our visit, which may account for variations in the incredibly sensitive equipment, and sets to work topping up the water in two horizontal pendulums. The water in these advanced spirit levels detects the slightest movement in the earth’s crust.

Beside the spirit level, a tube of Chinese porcelain 11 metres in length hangs horizontally by fine threads, measuring any deformation of the rocks around us. Similar instruments are used in China’s Three Gorges Dam, and are a sign of the international cooperation that goes into scientific projects such as this. The data from the laboratory is transmitted to the Casa de los Volcanes in Jameos de Agua or the Cabildo, and then shared with Madrid and other centres in Belgium and China.

It’s not the job of Orlando and his colleagues to warn of possible eruptions on Lanzarote. “All we do is gather information and pass it on to the Geoscience Institute in Madrid,” says Orlando. “It’s up to them to make decisions based on that information.”

It’s also impossible to predict future eruptions. All Orlando can say is that the instruments and equipment at the laboratory can detect the increased volcanic activity which usually precedes an eruption in the Canaries.

Although Orlando and his colleagues don’t go down to the laboratory as much any more, there is still one constant presence there – a small plastic smurf in a cage, which was gifted by a Belgian scientist, has been present in the laboratory for almost three decades, listening to the heartbeat of Lanzarote in darkness.

Virtual circuit of Lanzarote
Covid lingers, but is “under control”