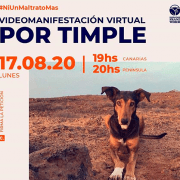 Tonight’s demonstration against animal cruelty in Arrecife, caused by last month’s killing of the street dog Timple and the suspended sentences handed to the dog’s killers, has been cancelled because of health concerns. A virtual online demonstration will take place instead.

86 associations had pledged support for the planned demonstration in Arrecife’s Calle Real, which would be accompanied by  simultaneous protests on other Canary Islands and mainland Spain, and which were sparked by the death of Timple last month, which has caused a storm of anger on social media.

However, one of the main organisers of the protest, the newly-formed anti-animal abuse group Ademal, announced the suspension of the event yesterday, giving the reason as “ the situation of alert caused by the new incidences of Covid-19 on Lanzarote and serious warnings by the Delegation of Government and the health service on the island”.

The decision is understandable, given that the demonstration promised to be one of the most well-attended in  recent years, and social distancing would have been difficult to monitor in a crowded street. At a time when Lanzarote has registered 70 new cases in a fortnight, organisers may have faced accusations of recklessness had the event gone ahead as planned

Instead, a virtual online demonstration will take place at 7 pm tonight, hosted by the Franz Weber Foundation.  A manifesto condemning the death of Timple and the “derisory” sentences given to those responsible for is death, and calling for tougher penalties for animal cruelty in the government’s planned animal welfare bill will be read out in front of Teguise Ayuntamineto and streamed live on various social media channels. Details can be found at www.niunmaltratomas.org.

French football international in Lanzarote
Why is no one in hospital with Covid-19?