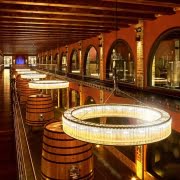 The Stratvs Case, described by a prosecutor as “the greatest attack on Lanzarote’s environment since 1993” has finally arrived in court, in a trial which could last until April.

The Stratvs Bodega, in La Geria, is undoubtedly an impressive creation. In the short period of time in which it was open, its wines won various awards and its restaurant also became a byword for fine dining on Lanzarote. However, that period did not last long. The Bodega was shut down by a court in 2013, and once again last year after it reopened without an official licence.

Stratvs was closed because courts ruled that its owner, Juan Francisco Rosa, may have committed various crimes of building illegally on protected territory and falsification of documents. Prosecutors are demanding a 15-year prison sentence and fines of up to €267,000. Other defendants include the architect of the bodega, Miguel Ángel Armas.

The prosecution allege that, instead of building a 171-square-metre extension to a villa as planned, Rosa constructed a 12,000-square-metre complex including a winery, a restaurant, a shop, carparks and gardens.

The case has already seen two ex- Mayors of Yaiza condemned in a separate case. Gladys Acuña and José Francisco Reyes have both been prohibited from holding public office for several years, along with the ex-municipal secretary of the council.

As the case commenced in Arrecife, lawyers for the defendants claimed that too much time has passed since the offences were committed and disputed the protected status of La Geria. The architect, Miguel Ángel Armas Matellana claimed that he only got involved because he thought it was going to be a “small project”, while Rosa has admitted to not owning 55% of the land in question. José Francisco Reyes refused to testify at all, not even responding to his own lawyer.