Alfredo Mendoza was placed in charge of the Sports Department at Lanzarote’s Cabildo in November last year, after the collapse of the pact in Arrecife where he had been in charge of culture, fiestas and the local police. He arrived at the department just as the island was about to take a turn towards normality after almost two years of Covid restrictions on sporting activities. 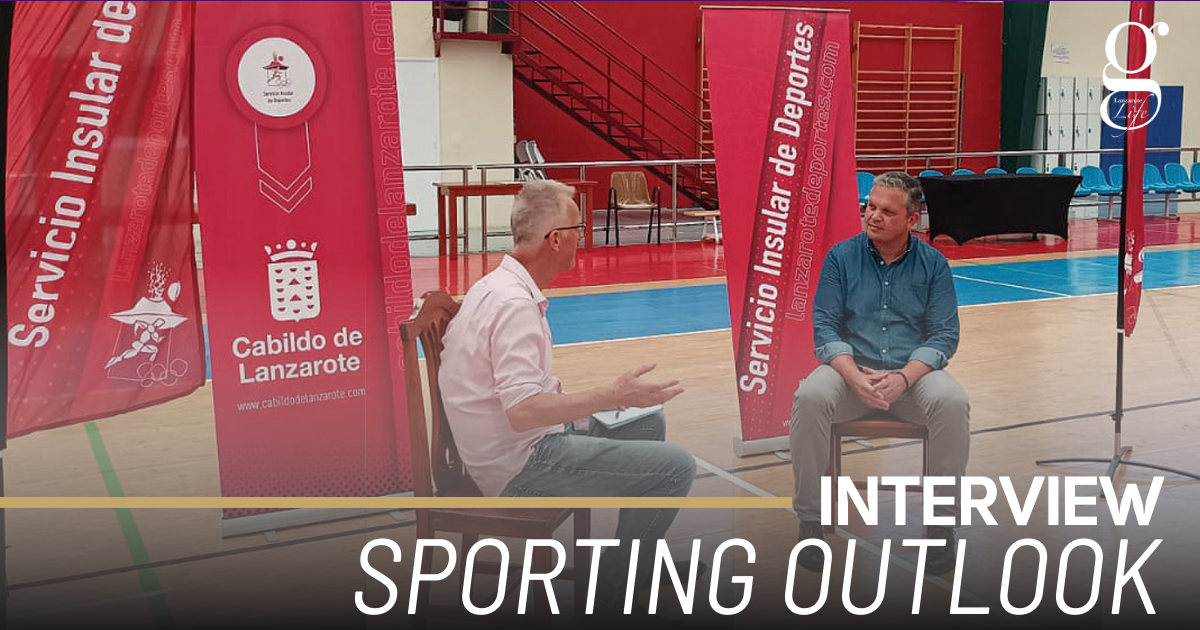 A keen Canarian wrestler and handball player in his younger days, Alfredo now practices yoga to keep in shape and has recently become addicted to golf. “Don’t tell anyone” he laughs “Socialists aren’t supposed to like golf ”. We met him in Arrecife’s Sports Pavilion, where he was happy to show us the impressive basketball court and the recently renovated gym facilities.

The Covid pandemic cancelled almost all sporting events on Lanzarote. What events will be returning and what have we lost?

I don’t think we’ve lost much permanently. The Wine Run is not taking place this year, but that’s because we had to plan early for this event, at a time when things were still very uncertain. It’ll be back next year, I think.

Otherwise, things are quickly getting back to normal. The Ironman, which is the Queen of our sporting events, is here again; the Ocean Lava race, the Travesía a nado El Río and the Lanzarote Marathon are all scheduled, along with several other events.

What about grass-roots level – in schools, for example?

During the pandemic, the Cabildo was criticised for applying stricter measures on sporting events than other islands. Was that a mistake in hindsight?

I don’t believe so. Covid was a shock – none of us had ever seen anything like it in our lives. Our first priority was health and safety, and it’s easy to forget that Lanzarote was by far the worst-affected of all the islands for extended periods. And these decisions weren’t just taken by the Cabildo – they were supported and approved by all the Ayuntamientos.

The week before lockdown we attended the “Grandparents” bowls tournament in Conil, which was a wonderful spectacle. Will sports like this that involve more vulnerable participants be back?

Yes. The tournament will start up again in October, and this year it’ll take place in Tinajo.

The recent cancellation of the Rallye de los Volcanes has caused a lot of controversy. However, many of our readers expressed support for the decision. What is your view?

As the island’s sports councillor it’s my job to support all sporting activities on the island. The Rallye de los Volcanes is the most important rally race on Lanzarote, and brings the island to attention at a national level.

The cancellation has marked a turning point in the way the island deals with these matters, and we have to learn from it. If this island is going to attract tourism for sporting activities, we will have to continue hosting events like this. But from now on we must also bear in mind the environmental factors that are involved. We live in a fragile environment, and we must protect it. That’s part of being a Biosphere Reserve, of course, but a Biosphere Reserve also means that we know how to live our lives with nature in mind.

The rally has taken place in previous years at times of the year when birds were not nesting.

That’s just one thing we need to consider – the seasons, the routes and the territory we’ll be using – and it applies to all sporting events, such as running, cycling and swimming, as well as motorsports.

What about sports funding? A lot of money was diverted to other areas during the pandemic. Are things back to normal?

We’re drawing up our budgets for the next year at the moment, and there’ll be at least €2 million to play with. We’ve always supported and sponsored various sports at the Cabildo, but our new project is to continue doing so, but also develop new infrastructure.

To do that we first need to assess the capacity of the island – the things we can and can’t do, and then we need to work towards achieving those that are possible. We want to create new spaces where sports can be practiced, for our local residents and also for the tourists that are important to us.

Playa Blanca and Costa Teguise are building new sporting facilities. Is this part of a focus on the resorts, rather than the inland towns of Yaiza, Tías and Teguise, which have traditionally had better facilities than the tourist areas?

Much of those developments are from the Ayuntamientos, but yes. I think that if we’re going to develop this island’s reputation as a sporting destination, these projects are important.

Which are the most outstanding Lanzarote sports stories of recent years?

Well there’s Ray Zapata, of course, the Arrecife gymnast who won a silver medal in Tokyo last year. I’d also point to the success and example of Lionel Morales, the Paralympic athlete who has opened the doors for so many.

In sailing we have many sailors who have achieved success at a global level, and our record in nautical sports is first-rate.