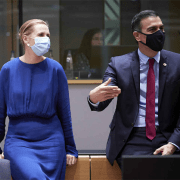 Spain is to receive €140 billion from the EU’s coronavirus emergency fund, of which €72.2 billion will be in the form of grants and the rest will be low-interest loans.

Spain’s share of the €750 billion package, which was finally agreed on Tuesday morning after several fractious days of negotiation, will make it the second-largest recipient after Italy. The funds come with several conditions that Pedro Sánchez will have to address immediately.

Sánchez described the deal as “one of the most brilliant pages in EU history” while Spain’s Minister for the Economy, Nadia Calvino said “new resources will be mobilized to encourage recovery and to re-orientate our economy towards a more inclusive and sustainable kind of growth.”

The deal was delayed by objections from a group of countries labelled “frugal”, who object to giving grants rather than loans to countries such as Spain and Italy. Led by Mark Rutte from the Netherlands, these countries have succeeded in demanding the submission of a plan on how the funds will be spent. The plan must fulfill certain conditions and Pedro Sánchez must present it to Brussels by 15th October,.

The EU is conscious that its drive for austerity and cuts during the 2008-2015 crisis was hugely unpopular in many member countries, and is also aware that the coronavirus crisis and its economic impact is nobody’s fault. For that reason, the conditions appear rather less stringent  and controversial than the notorious demands that the Troika of the EC, the ECB and the IMF imposed ten years ago.

The main condition is reinforcement of the health system. The EU praised the achievements of Spain’s health services on limited budgets, but highlighted that the coronavirus crisis had highlighted deficiencies in infrastructure, supplies and staffing which must be addressed.

Other conditions require Spain to support employment through job-preservation schemes, address its high level of temporary contracts, improve education and training with a special focus on new technologies and digital resources, adopt new policies to promote research and development and save energy and combat climate change.

“Budget adjustments” in the medium term will also be required, and it is here that the shadow of the Troika could raise its head, with action required on Spain’s pension schemes and a plan to address debt.

In the Canaries, the regional government’s vice-president Roman Rodríguez requested that the Spanish government was “as sensible with its allocation of the funds as Europe has been.”