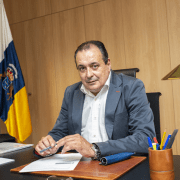 The Canarian Government has warned that it will increase checks on private parties and crack down on them if measures against coronavirus are not followed carefully.  Health councillor Blas Trujillo made the statements at a meeting with a responsible leisure organisation yesterday in Las Palmas.

“The nightlife sector is complying with the regulations laid down by the Canarian Government,” said Trujillo, “However, it’s the non-regulated leisure activities that are really worrying us because that’s where most risky behaviour is taking place.”

Trujillo appealed to the public not to attend these types of gatherings, and to report any events that appeared suspicious.

The Canarian Government’s concern has been raised by a cluster of three recent cases involving young people on Gran Canaria. These seem to stem from a party, and the list of suspected contacts currently stands at 45. Video footage of a beach party in Maspalomas on Gran Canaria has also caused controversy, after it showed party-goers not wearing masks or observing social distancing. The bar in question has cancelled all future parties.

The risks of private parties have also been underlined by the recent outbreak of 12 cases following a family reunion at a villa in Fuerteventura, which is by far the worst of the recent outbreaks on the islands (excluding cases on boats carrying migrants, which have been fully contained).

Canarian Vice- President Román Rodríguez has also warned that masks will be made compulsory in all public places if “the rules aren’t followed and there is an absence of citizens’ responsibility.”

Rodríguez, of the Nueva Canarias party, has consistently adopted a hard line on coronavirus measures.  However, he ultimately believes that the key to combating Covid 19 is that people follow the rules in private. “In the public sphere we can pressure people to comply, but this is difficult in private,” he commented recently.

The Canaries and Madrid are currently the only parts of Spain where mask use is not compulsory indoors and outdoors. While Madrid’s refusal to adopt mask laws appears to be related to the friction between the city’s PP leaders and Pedro Sánchez’s socialist-led government. (the capital has seen more cases of coronavirus than any other region of Spain and still reports dozens of cases daily); the Canarian executive based its decision on the good performance of the islands.