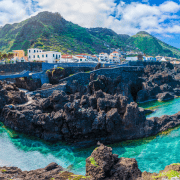 The Canaries is in the process of setting up one of the first “safe corridors” for tourism in Europe, linking the islands to Madeira, the Portuguese archipelago to the north.

Canarian President Ángel Victor Torres reached an agreement with Madeira’s President Miguel Filipe Machado de Albuquerque at a meeting yesterday. Both leaders agreed on carrying out PCR tests at origin as a condition of the safe corridor.

The agreement has been made possible because of the positive figures achieved in Madeira and the Canaries. Madeira has registered 90 cases of Covid 19 of which just nine remain active, and the Madeira archipelago has suffered no deaths.

Canarian airline Binter flew 35,000 tourists to and from Madeira last year.  The route, which was introduced relatively recently, has proved a popular one.

The concept of safe corridors has now become part of the international response to the Covid 19 crisis. Yesterday, UK Prime Minister Boris Johnson said  “I mentioned earlier on the idea of safe corridor – safe travel between the UK and other countries with low or similar levels of infectivity – and we will certainly be developing that as we go forward”.

Shortly after this statement, however, Johnson’s Home Secretary Priti Patel said that there would be “no exemptions” to her plan to introduce mandatory 14-day quarantine periods on all arrivals in the UK, which is due to start on 8th June. The plan will be reviewed on 28th June, at which time Patel said “air bridges” (safe corridors) may be considered.

Patel’s quarantine plan has been strongly criticised by the opposition, who wish to know why it wasn’t introduced much earlier, and by tourism-related businesses. Ryanair issued a statement saying “We look forward to welcoming thousands of UK visitors going on their well-earned summer holidays to Portugal, Spain, France and Italy. We are equally confident that inbound visitors to the UK will not be deterred by this completely ineffective and useless quarantine measure, which both Priti Patel and Grant Shapps know cannot be implemented, cannot be policed and has no scientific basis supporting it whatsoever.”

Meanwhile, Germany’s foreign minister Heiko Maas, has lifted travel bans from the country to all EU states and the UK, with the exception of Spain and Norway. The reason for Spain’s exclusion is that it has a travel ban in place.

Spain’s Foreign Minister Arancha González Laya later tweeted that she had spoken to Maas and been assured that Germany will remove the recommendation not to travel  once Spain lifts its ban, which is likely to occur on 22nd June.

Nobody Left Hungry
Scroll to top