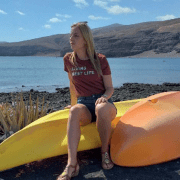 Until recently, Sandra Viste was living and working as an entertainer in various hotels on Lanzarote. Aged 31, she was friendly and popular and had made many friends on the island. Then she was diagnosed with a brain tumour.

Soon she had lost her job and her apartment and was waiting for an emergency operation in Barcelona when she decided to spend Christmas with her family in Belgium.

A brain scan in Belgium revealed that the tumour had grown and become cancerous, and that an emergency operation was needed. Unfortunately, Sandra was too ill to fly to Barcelona, where she had full health cover, but had be operated on in Belgium, where she had no cover. She entered surgery in February this year.

Two operations and a three-week coma later, Sandra is recovering in Ghent, where she is receiving daily radiology treatments as well as chemotherapy. She has no income, and the bills are coming in. Any help you could provide would be hugely appreciated. Sandra’s friend Paul McKeever has set up a GoFundMe page titled Sandra V rehabilitation where donations can be made.

Make friends and discover Lanzarote on a bike!
New Normal of Real Estate