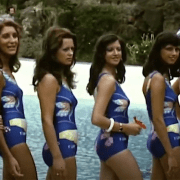 Join the contestants in the Miss Spain contest 1973 as they arrive at the old airport, parade in regional costumes at Timanfaya, show off their swimsuits at Jameos del Agua and  parade in Arrecife.

The eventual winner of this contest was Ámparo Muñoz from Malaga – who went on to win the Miss Universe competition and enjoyed a successful career on the Spanish big screen.

Plenty of other vintage photos and videos of Lanzarote can be found at memoriadelanzarote.com.

Arrecife under the spotlight
Scroll to top