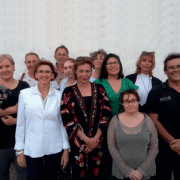 The recent case of the street dog Timple has once again highlighted the issue of animal cruelty on Lanzarote. ADEMAL is a new and different Lanzarote animal charity, and it’s already making its mark on an island where campaigning against animal abuse is still very necessary. Birgit Wenning of ADEMAL popped in to chat to us last month.

Thanks for coming, Birgit. What is ADEMAL?

It’s the Association for Defence Against Mistreatment of Animals, and we were set up on June 1st this year. There are 12 of us, and our main task is to report cases of mistreatment and abuse of animals to try and make sure that effective action is taken.

So you’re not an animal rescue group?

No. People shouldn’t call us to pick up lost or abandoned animals – we don’t have any resources for that. They should call us whenever they see evidence of cruelty and abuse.

What can you do to help?

First, we can check whether laws are being broken, which may involve gathering evidence over a period of time. Once we’re sure we have a case, we’ll report it to the police and to the animal welfare councillor in the local Ayuntamiento. It’s important that reports are presented soundly, as they will be rejected if any element fails. Even that may not be enough, and it’s important to chase complaints up to ensure they’re not shelved.

What response have you had so far?

It depends on who you ask. Among animal supporters the response has been very positive. It’s not so good in the local authorities – Nicolas Saavedra in Tías is one of the few council officials who is really helping us. And we’ve had an angry response from some people we’ve reported. They say “They’re my dogs, I can do what I like with them.”

But they can’t, of course.

No. There are laws. They’re not strong enough yet, and they need to recognise that animals are living beings, but we’ll see what happens with this government’s proposed Animal Welfare Law.

How can people support you?

They can join us, for just €2 a month. Those subs will help us, but other donations are also welcome. Above all, we need people to report to us. You can do it anonymously, if you like, and we’ll maintain your anonymity if you prefer. Report cruelty to us on our Facebook page by Messenger, on Instagram or e-mail us.

What about stray dogs or dead animals on the roads?

Call 112 and report them. They have to send someone to do something, but if nothing is reported nothing will happen.

Does ADEMAL have a wider animal rights stance?

No. We’re here to tackle cruelty and abuse . That’s the priority. The rest can come later. Thanks, Birgit, and good luck. It’s time for a change. Contact Ademal on Facebook at Ademal Lanzarote or ademalcanarias@gmail.com.

Lessons for life
Scroll to top