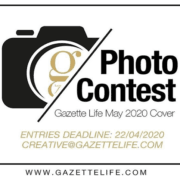 We received a great response to our appeal for photos for the cover of our May edition, but after looking at all the entries closely, it’s fair to say that four fantastic shots stood out.

Benno Hessler’s stunning landscape shot shows sunlight breaking through clouds over a Timanfaya landscape that did not exist 300 years ago. In the foreground, a cactus patch reflects the way islanders have also changed the landscape – these plants are also relative newcomers to the island.

This is a hint of the Lanzarote many of come to love and Cristiano Ostinelli’s stark, dramatic black and white photo of a palm tree thrusting upwards through hostile volcanic terrain is a reminder of the tenacity and bizarre beauty of natural life on Lanzarote, as well as the contrast between the stillness of geology and the endless movement of clouds and palm leaves whirling in the wind.

Liz Sparrow’s sunset shot of the distant volcanoes of Fuerteventura and Isla de Lobos would already have been an incredibly evocative, tranquil photo, but with the addition of a dolphin caught mid-leap it becomes one of those once-in a-lifetime shots. During the lockdown, increased amounts of sea mammals have been spotted off the coasts of the island, and this photo celebrates their magic

Raphael Sanchez’s young man walking on Famara beach is  a tiny figure, captured magically in an immense mirror formed by fiery golden skies and a vast, glistening expanse of wet sand. At a time when we’re trapped behind closed doors, this is a reminder of  a feeling we all recognise – the sheer wonder and freedom of existing in nature’s glory.

Next week we’ll look at some of the photos that didn’t quite make the final round, but in the meantime there’s still time to vote for your favourite cover.

Make friends and discover Lanzarote on a bike!
Adults to be let out for exercise from May 2nd “if all continues well.”