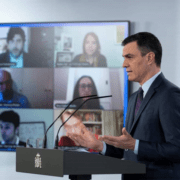 Spain’s President Pedro Sánchez has announced that adults will be permitted to leave the house for walks or exercise from May 2nd “as long as the evolution of the pandemic is favourable, which it continues to be up until now.”

Sánchez said the government would authorise “individual physical activity” and “walks with people you live with”, but provided no further details on types of activity, time limits, permitted distances from home, vehicle use, etc.

The announcement was made in advance of the government’s de-escalation plan, which will be presented by the Council of Ministers on Tuesday after further consultation with regional leaders. But Sánchez has made it very clear that there will be no devolution of power allowing regional authorities to set their own agenda for leaving lockdown.

“The de-escalation will be gradual and happen in stages. We won’t all progress the same , but we will do so with the same rules,” said Sánchez. “We can’t all go our own way. If one falls, we all fall. We can’t fall into the error of division and confrontation.”

Nevertheless, Sánchez’s insistence on Madrid keeping firm control may cost him support from nationalist Basque and Catalan parties who currently back his coalition, and there have also been expressions of frustration from the Canaries. “They neither live nor let live” tweeted Lluis Serra of the Canarian Government’s emergency committee, who was key in drawing up Canarian de-escalation plans which have been placed on ice by central government.

Sánchez issued a warning that seemed to be aimed at the Canaries, saying that “the population is most vulnerable in the places where there has been the lowest incidence of the virus.”  He pointed out that the amount of positive cases or the accumulated incidence of the virus are not the only factors that will be taken into account when relaxing the lockdown, but that other issues, such as the readiness of health services to deal with a second wave, will become more important.

The first stage of the de-escalation process begins today, as children under the age of 14 are now permitted to leave their homes accompanied by an adult from their household. They must go no further than one kilometre from their home, and may spend no longer than an hour outdoors. Driving children for walks is prohibited.  Children of 14 and over are subject to most of the same restrictions as adults, and may carry out essential activities such as shopping for food, taking rubbish out or walking dogs. They are, however, not permitted to take younger siblings out

Toquinho in the Jameos del Agua
How Coronavirus Swept the World