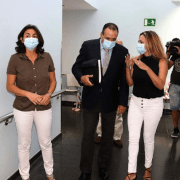 The Canarian Government’s health councillor, Blas Trujillo,  has said that the Canaries is “prepared” to deal with an outbreak of coronavirus on the islands.

After returning from a tour to the Dr José Molina Orosa Hospital in Lanzarote, Trujillo told the Canarian parliament that the Canaries has the capacity to confront new outbreaks, and meets the level of 1.5 and 2 intensive care beds for every 10,000 patients required by the Spanish health department.

The Canaries reach this figure by adding the 172 current beds in intensive care units to a further 243 “critical care” beds with ventilators that fit the requirements of the health ministry, resulting in a figure of 1.93 beds for every 10,000 citizens in a population of 2.1 million.

Concern about a second wave is rising as infections once again rise alarmingly on the Spanish mainland, with Catalonia and Aragón being the worst-affected areas. However, although many have expressed fears about tourists spreading the virus, only one of the 120 active clusters and outbreaks currently registered in Spain seem to have been caused by tourists. This is a case involving three members of a family of four Spanish tourists who tested positive in Menorca last week.

40% are, in fact, the result of family reunions, such as the outbreak that recently caused 10 contagions in Fuerteventura and Gran Canaria. This was caused by a man who returned from Mexico with the virus, then passed it on to his sister, who attended a family party on Fuerteventura and another on Gran Canaria. Most other outbreaks have been detected in workplaces or sanitary facilities such as hospitals and care homes, and it’s fair to say that, once again, the tourist regions of Spain appear, so far, to be avoiding the worst of the new contagions.