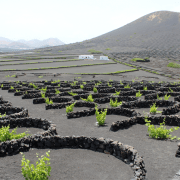 While tourism ceased to exist on Lanzarote during the lockdown, the island’s wine sector continued to face the future. We spoke to Víctor Díaz, the President of Lanzarote’s Regulatory Wine Council, to find out what the future holds for the island’s vintages.

Víctor Díaz greets us at the smart shop in Tías that he established to sell and promote his Vulcano bodega, one of the island’s youngest and most innovative wineries. However, Víctor’s no newcomer to wine – he’s the fifth generation of winemakers on his father’s side of the family, and third generation on his mother’s side.

Victor, what type of harvest are we going to have this year?

Not as good as last year, I’m afraid. We’ve had a drought, and we’re looking at a maximum yield that will be lower than recent harvests.

But you already have plenty of wine remaining, isn’t that right?

The island’s bodegas have around two million litres of wine from previous harvests, which is enough for 26 million bottles. This year’s harvest will be on top of that, and although it’s likely to be a smaller harvest, I think the quality of grapes is high.

When does the harvest begin?

As always, it’ll be the first harvest in Europe, beginning in the middle or end of July.

Will special measures be needed for the grape picking because of Coronavirus?

I don’t think so. It’s an outdoor activity, and there are already hygiene measures in place.

What is the key to the future of the island’s wine sector?

Promoting our product abroad. Here on Lanzarote what we have to offer is the malvasía volcánica grape, which is unique in the world, and a cultivation method that is found nowhere else on earth. These are what give added value to the Lanzarote denomination of origin.

Another thing we’re seeing is bodegas extending their offer and opening up to sell food, as well as just wine.

Bodegas have been coming up with innovative selling points recently, though.

Yes. There’s La Grieta, who have developed wines made from grapes picked at night time, and who sell bottles which have been matured underwater; there’s the special green bottles of Bermejo; El Grifo offers wine from the oldest bodega on the island, and we’re the only bodega selling vegan wine.

Far from it. Many other winemakers use eggs, milk protein or even meat products as fining products, to clarify the wine. Ours is made from pure fermented grape juice, and is also suitable for those with allergies to eggs and dairy products.

How important are Malvasía grapes?

Malvasía is the queen of grapes here on Lanzarote, the most grown and harvested crop, and the source of the island’s most popular wines. We’re not known for red wines, but a lot of bodegas have been producing them recently and they are improving all the time and starting to be really good, I think. Then, of course, there are the sweet fortified wines such as muscatel, which have a historical importance on the island and which are still highly regarded, award winning wines.

What are your duties as president of the wine council?

They’re mostly administrative and regulatory. Lanzarote is a Spanish denomination of origin, which means its products must meet stringent standards.