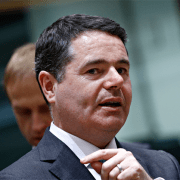 The election of the Irish finance minister Paschal Donohue as president of the EU’s Eurogroup of finance ministers could have far-reaching consequences for Spain’s economic future.

Donohue’s victory by 10 votes to 9 came as a surprise to the largest economies in the EU – France, Germany, Spain and Italy – who had all backed the candidacy of Spain’s Nadia Calviño. However, a rebellion of the smaller EU countries, and especially those in Eastern Europe, gave the win to Donohue.

Calviño’s defeat will be seen as a setback for Spain’s president Pedro Sánchez, while vice-president Pablo Iglesias described Donohue as “the candidate of nations who defend tax havens” and said his election was “bad news”.

After the secret ballot, Calviño said “We had the support of ten ministers, which would have been enough, but someone didn’t vote the way they said they would.” Calvino, however ,was adamant that her loss would not affect Spain’s position in the forthcoming negotiations about post-coronavirus aid packages to boost European economies: “The negotiations are going to be complicated, and they’ll be every bit as complicated now as they were the day before yesterday,” she said.

Nevertheless, Calviño’s pointed gratitude for the support of “countries that form 80% of the EU’s economy” betrays annoyance at what has been seen as rebellion by the smaller countries, and hints at possible tensions when it comes to the allocation of €750 billion of funds.

Some commentators have said that Calviño’s defeat was due to the fact that she is the member of a nation that stands to gain most from the EU’s anticrisis fund. Many of the smaller nations belong to the “frugal” wing of the  EU, which opposes massive subsidies to southern economies that they depict as lax. These tensions , which hark back to the Greek crisis of 2014 and the EU’s handling of the 2008 crash, still run deep in the EU, and are thought to be the reason why both candidates came from bailed-out countries.