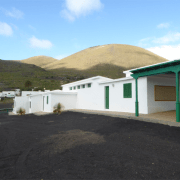 Lanzarote registered six new cases of coronavirus this week, five of which were related to the arrival of a boat bearing migrants from Morocco.

The most recent case is a resident on the island who recently returned from a trip to Mexico. After experiencing symptoms of the virus, he was tested at the Dr José Molina Orosa Hospital , where a test result on Friday was positive. The man is now in quarantine at home, and possible contacts are being contacted for tests.

The other five cases were migrants who arrived at Puerto Naos on Wednesday.

Test results are still pending on occupants of another boat which arrived near Caletón Blanco yesterday morning. The boat was not detected by the Guardia Civil’s SIVE early warning system, and nine people were picked up by emergency services at the location and taken to the Nature Centre in Maguéz for treatment. Another five were located later, three of whom had made their way to Arrecife. However, 26 passengers were reported to be on the boat, leaving 12 more suspected to be at large.

Almost a thousand migrants have arrived to the Canaries in pateras in recent months, with the Canarian route seeming to be currently more popular than other traditional routes such as the Strait of Gibraltar.  On Lanzarote and Fuerteventura, a number of arrivals on pateras that left from the town of Tarfaya have tested positive, suggesting that an under-reported outbreak may be occurring in that region.

This week’s new cases come after two weeks during which Lanzarote had no positive cases.