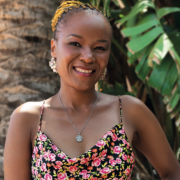 Colleen Meje entertains hundreds of holiday makers every week with her fantastic cocktail shows at luxury hotels such as Lani’s Suites de Luxe, Lava Beach and La Isla y El Mar Hotel Boutique, to name but a few. Julie Helliwell met the talented singer who lights up the stage.

How long have you been a singer on Lanzarote?

I’ve been singing here for six years. For the first year I was backwards and forwards to South Africa, but then I joined the Lanzarote agency and they were wonderful. It was hard moving here alone from a foreign country but they made it comfortable. I also had support from my ‘Lanzarote parents’, John and Carol Stock, who I met through church. They really helped me feel at home.

What types of songs do you sing?

I love singing jazz, classical and musical numbers, but I’ve had to adapt. I still sing those styles in some hotels, but generally when people are on holiday they want to listen and dance to happy music. It’s great when the audience love it. I was a selfish singer before and just sang songs that I like, but I’ve learned a lot working here and it’s humbled me.

How many songs do you sing in a show?

In a 90-minute show I sing about 28 songs with no break but I have about 50 songs that I sing.

What do you do in your spare time?

I spend time with the loves of my life; my partner Dario and our dog, Galletta. We go for walks and love going to the beach. I do like watching other people perform but I’m also quite a hermit because I only have one night off every two weeks.

How do you look after your voice?

I find that speaking less, exercising and not eating dairy helps. I used to eat dairy and had lots of vocal problems.

What’s been your most memorable musical experience?

Me and my stage father, Alvon Collinson, did loads of stage shows in South Africa. I really miss being in a show. I’m really shy but I love acting, and when I’m a character I forget about being shy. He taught me everything I know about show business. I was also on the ‘Idols’ TV show in 2012. I got into the top 60 from thousands of entrants.

What’s your dream for the future?

I would love to sing with a band. I know that there’s room for me to grow as a singer and I’m really open to singing different types of music as I miss working with other people.

Click the video below, to see Colleen performing live.