José Juan Cruz is already a familiar face to Tías residents, having been the Mayor of the island’s most important tourist municipality for several years until 2011, when he was ousted by Pancho Hernández. This June, however, “Pepe Juan” managed to retake Tías for the Socialists after a close contest and a pact with councillors from Podemos and Avanza Lanzarote.

As a result, a new team will confront the next four years in Tías – the municipality that is Lanzarote’s economic motor and its tourism flagship.

How does it feel to return to the Mayor’s office in Tías eight years on?
In all honesty, this wasn’t on my road map. When I left office eight years ago I didn’t intend to come back to municipal politics. I worked in the Canarian Government for four years and then in the Cabildo here on Lanzarote for another four. Nevertheless, political parties have their own requirements so I was happy to stand as candidate for this position.

There was no absolute majority in the election. My party drew with the Partido Popular on 9 seats each, so it was a question of seeing which of the remaining parties, who won one seat each, would work with who. Once we looked at the programmes on the table, that wasn’t so difficult. I’ve got a young team here with me, most of whom I am working with for the first time.

What are your priorities?
First we need to sort out internal organisation here. There are 500 official requests by citizens that haven’t been answered yet, and we need to give people those answers.

We need to ensure that maintenance throughout the municipality takes place and is kept up 365 days a year, recover those areas that have been abandoned and ensure that tourism – our main source of income – is protected.

At the moment there are 184 people working for this council, including the local police. It’s not enough to do everything we want to do, but we have eight million euros of earmarked funding that has to be spent by the end of the year, and we need to find a way not to lose those funds.

How has Tías changed in the last eight years?
We’ve had record tourism levels, and employment has improved, but low wages are still a problem. There are levels of poverty in the municipality that would have been unthinkable a few years ago.

How do you see tourism developing?
We’ve been very lucky in recent years, with record levels of occupation, but those have come at the expense of other destinations such as Greece and Turkey. Now that those markets are recovering we need to be prepared. We can offer safety and stability, but we also need to focus on quality as much as quantity. Here in Tías there’s so much we can promote, from local cheese and wine to fiestas.

Any other plans?
We want to extend the Rambla (the back road in Puerto del Carmen) to the airport and equip it with cycle paths and pavements. We also want to reduce the volume of traffic at the Macher roundabout, which sees 25,000 cars pass every day, and on the road to Puerto del Carmen from the airport, which has even more. Finally, we’ve drawn up a Plan of Modernisation to boost the improvement of Puerto del Carmen.

What is your main consideration?
I think the main thing is not to waste time. We’re not going to spend our time moaning about the previous government like our predecessors have been doing for eight years. We’ll look at things and, if they work, we’ll leave them as they are; if they need changing, then that’s what we’ll do.

Do you have a message for the foreign residents of Tías?
Of course I do. We’re a multicultural municipality of 20,000 people from 70 nationalities. Our primary school at Puerto del Carmen is almost 70% foreign, and we’re naturally an integrating place. We want to improve this municipality for everyone, of all ages and backgrounds.

Heart of Tourism
Tías is not only the cradle of Lanzarote tourism – it is its centre, with Puerto del Carmen remaining the largest and most popular resort on the island since the construction of Hotel Fariones in the 1960s.

While the municipality’s capital is the hilltop town of Tías, most of its residents live in Puerto del Carmen, and it is here where the vast majority of foreign residents live permanently, forming established British, Irish and other overseas communities. 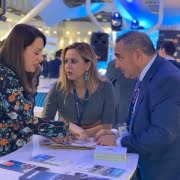 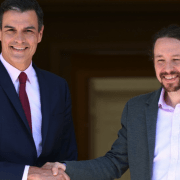 A Government at last 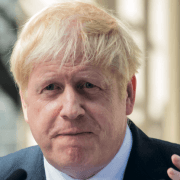 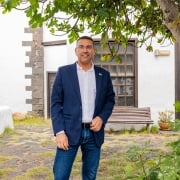 Face to Face: Mayor of Teguise 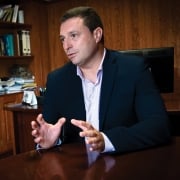 Face to Face: Mayor of Yaiza

The Mountain is her Throne

This Island’s a Stage