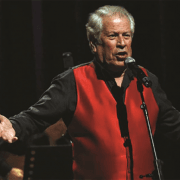 On the 24th of this month, the Lanzarote-born tenor Blas Martínez will present a programme of songs at San Bartolomé’s pretty theatre. We talked to a man who started life by the side of Arrecife’s Charco and went on to conquer the world.

Where did you grow up, Don Blas?

In the old house that still overlooks the Charco near the tax office. In those days it wasn’t as pretty as it is today – but although it was full of rubbish we swam in it all the time. One day a medical practitioner fell off his motorbike near our house and I pulled him to the sea and saved his life.

When did you leave?

In the 1950s. At that time the Canaries was undergoing “Venezuela fever” because of the opportunities across the ocean. I was working at the port here but my family weren’t reliant on my income, so I left for Caracas.

When did you start singing?

I sang in Lanzarote, but never stood out, but in Caracas I joined a choir and discovered my voice. After singing Granada at a concert, a businessman hired meto sing in a zarzuela (light opera) called Los Gavilanes. I had to learn it all in a week! Then I went to Venezuela’s National opera School, studying under the soprano Leila Mastropaola. I continued to sing in Venezuela before receiving a grant from the Venezuelan Government, Lanzarote’s Cabildo and the Canarian Savings Bank to study lyrics singing at La Scala. Only two students graduated, a Russian woman and myself.

What was your first professional performance?

I sang the role of Don José in Bizet’s Carmen at the Ferrara Opera House.. It’s still my favourite role.

And your career afterwards?

I stayed in Italy for seven years with my young family, before returning to Venezuela. I’ve performed all over South America as well as in Israel, Germany and throughout Spain. My family returned to Lanzarote in the 90s and we’ve been here since.

Did you know Alfredo Kraus?

Of course. We performed at the same time together in Turin.

Has age affected your voice?

It changes it. The higher registers start to go, but I still enjoy singing. I always felt better after singing than I did before. I don’t sing opera nowadays, though, and prefer to sing lighter music.

Tell us about the concert on the 24th April.

It takes place at 8.30 pm at the Theatre in San Bartolomé, and I’ll be singing a programme of light music accompanied by two fine guitarists: Juan Santana from Las Palmas and Paco Feria from Tenerife.